I am getting a message that says: “This installer requires dialog on your system” followed by a blank window that says Install League of Legends at the top and two buttons labeled “cache” and “cancel”. This occurs when I click the install button next to the “Standard (Launch Helper)” for League of Legends in Lutris. I have no clue what to do and it seems to me there is a simple fix but I cannot seem to find any help searching the web. 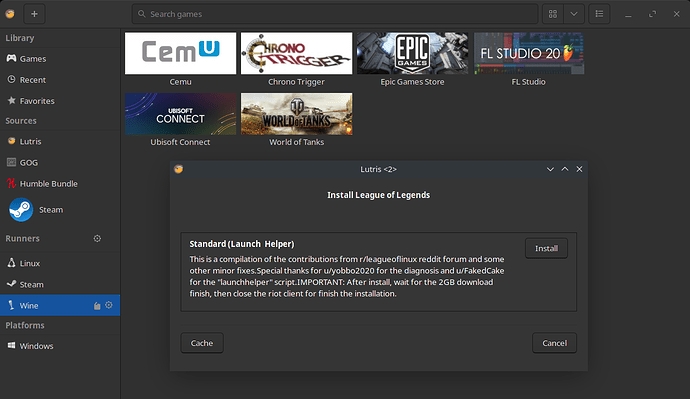 If install button doesn’t work, then, follow the instruction from the message? Install dialog on your system?

Hey, just made an account to say that I’m having the same problem on Ubuntu and you’re the only result I’m getting when I Google it so it might be a recent bug with Lutris. I had actually installed League okay just two days ago.

To clarify for the other poster, after I press “install” a box pops up saying “This installer requires dialog on your system” and the only option is “Okay.” Can’t share screenshot of it but it’s basically a dead end.

The message is crystal clear:

This installer requires dialog on your system

So, again, do as said, and INSTALL DIALOG ON YOUR SYSTEM.

Alright. I’m not very tech-savvy and I didn’t know that it was something to install. Thanks for your help

Same LMAO. Thank you very much guy by name of @omano.

To be fair, no where in the popup did it say to install anything, at the very least on my screen, nor did it capitalise the “d” in “dialog” indicating that it is a proper noun.

No, it’s not. Install scripts are contributed by the community.