So I made the switch from windows to the latest manjaro KDE but I can’t for the life of me figure out how to import/manage/use my remote server ssh keys.

On windows I would convert pem private keys to ppk files with puttygen.exe and manage them in pageant.exe, which is the default keyring that comes with putty on windows.

Manjaro seems to point me towards seahorse but seahorse won’t let me import any of my old pem keys. If I go to seahorse > import from file > select the ssh key pem file Seahorse will display information about key but the actual import button is grayed out?

The “pem” keys I’m try to import/use are just the normal ssh keys that AWS EC2 spits out when spinning up a new server instance. So the file content of these keys just looks like this…

I’m kind of pulling my hair out on this one, I’ve done a bunch of googling about this issue and I asked in the Manjaoro matrix rooms but I haven’t coming up with any solution so far.

Until I figure this out I keep having to boot back into my old windows OS just to be able to work.

For some more in depth knowledge google for ssh, or use man ssh in the terminal. SSH is integral to linux so there is no putty or such thing. Its a command prompt program configured like all others with configuration file(s)

Thanks for the help @Th3Z0ne, that got me up and running.

I feel a bit silly since I’ve done that many times on remote linux servers via ssh but somehow I didn’t think about ~/.ssh/ on a DE.

That said, I was hoping for a more GUI based solution for key management/generation on a DE.

The keys still don’t show in seahorse after configuring things in ~/.ssh/. Is there some other keyring GUI I should look at instead?

The keys still don’t show in seahorse after configuring things in ~/.ssh/. Is there some other keyring GUI I should look at instead?

I am quite certain that seahorse does not, and is not indended to manage keys for SSH; But please do not take that as true - I am not certain as stated.

The keys still don’t show in seahorse after configuring things in ~/.ssh/.

Seahorse is a GUI for gnome-keyring, so you’d need to install and configure that, however since you’re on KDE, kwallet may be a better choice but I’m not sure if it does what you want or even if it has a gui.

Is there some other keyring GUI I should look at instead?

Just found muon (formally snowflake, also the name of a db hence the name change), which is a GUI SSH client with the ability to manage keys. No idea what it’s like though. There’s an orphaned package in the AUR under snowflake. 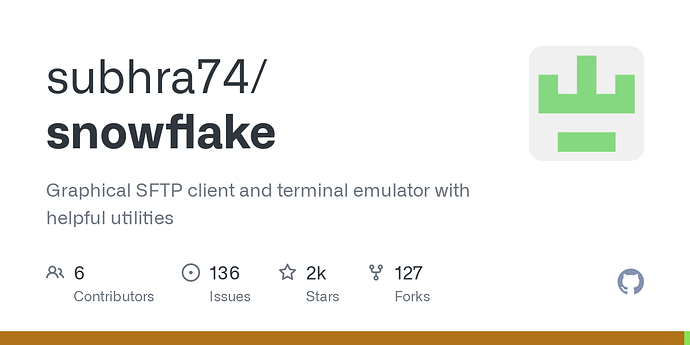 You don’ t need no gui for ssh-keys.
You may use a ssh-agent, and then just type ssh-add ~/.ssh/the-name-of-the-keyfile in console (then the key is unlocked and directly useable until you log out)

ssh-keys count as “imported” when they are located at ~/.ssh/keyfile-name
ssh will find them and use them