I use pamac(gui for pacman) to install it, it used to work with quite everything i downloaded before, but when i tried to install atom that’s happend 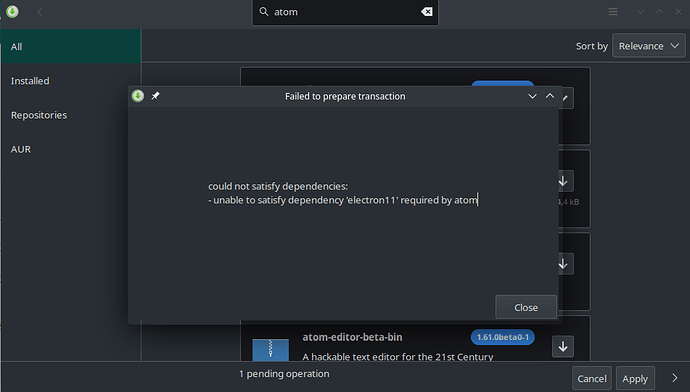 Can you guys help me?

First install electron11-bin package from the AUR and then proceed to install atom.

Atom’s been nuked. It will shortly stop being developed or maintained.

Having said that, you see how the error message says you need electron11 but you’ve downloaded version 19-something? You’re gonna need the right version but it’s not in the repos so you’ll have to get it elsewhere.

It conflicts with node js, so it seems that it’s not an option for me

So… its seems that vs code is the only one code editor of its kind now?
For some reason i need an alternative to vs code with the same functional, can you suggest me something please?

Then you can’t use Atom. Atom is dead anyway, don’t use it.

I use pamac(gui for pacman) to install it,

pamac is not a front-end to pacman. pamac is a separately developed package manager that’s compatible with pacman, and it comes in both a GUI version and a command-line version.

So… its seems that vs code is the only one code editor of its kind now?

I do not know vscode, but kate is a pretty good editor that can keep track of multiple projects.

I’ve also heard that geany would be a very powerful editor, but I’ve never used it.

thanks, i’ll try some)

Vscodium has the same functionality as vscode, just all the Microsoft stuff stripped out

I have used Sublime Text for so long I don’t remember when I switched over from TextMate on OS X. It isn’t FOSS and it isn’t free either, but I thought it was worth the money when I had it to spend, so I paid for it.

The only FOSS text editor I truly like is vscodium. I would use it more but I am old and Sublime Text’s shortcuts are deeply etched in my synapses.

Both are as flexible and powerful as Atom wanted to be.