I know it might not be specific to Manjaro but I can’t use the function keys of my 60% keyboard, when I press Fn + 1 it lowers the brightness instead and I am not even using a laptop.

Did you try different keyboard models, layouts and variants which fits your keyboard?

On XFCE you can try them here: 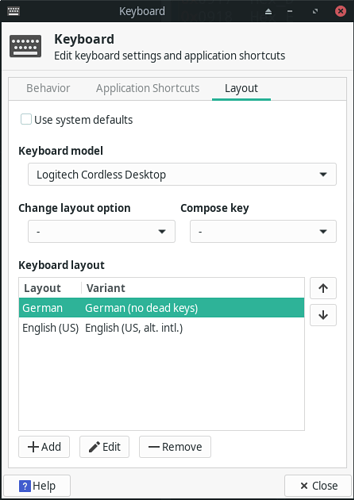 Same Problem for me,
I am using a drevo calibur v2 60% keyboard, which can switch between mac and windows mode.
On Windows everything works normal, Pressing fn + 2 = F2
On Manjaro it instead uses the mac keymap for fn, so fn + 2 = brightness lower.
If i put the keyboard in mac mode, it uses the normal fn map in manjaro but then alll keys, including super are in mac style…

I thought the keyboard switches mode only in hardware…
Weird that everything is normal on windows…
Edit: Tested the Problem on Gnome and KDE each on Ubuntu and Manjaro, everywhere the same

I was thinking of getting one of those small keyboards - but as developer and code monkey - I decided to use the standard layout with F-keys.

Every key or combination sends a sequence of scan codes and some keyboards need a vendor specific system software to work as expected.

Apparently the device in question has the scancodes somewhat mixed up.

The only way to find the correct layout for Linux - if it at all exist - is to test every single layout in the control panel keyboard preference section.