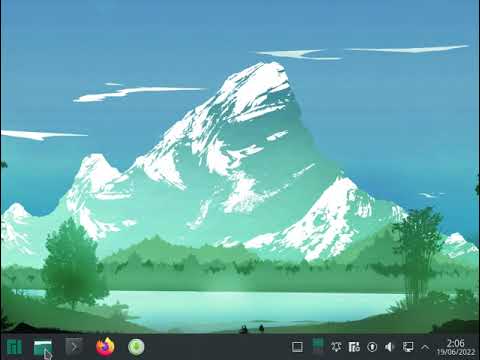 if Dolphin launches with the embedded terminal open it messes it up.

You may think the video is descriptive.
It’s not - not to me.

What do you expect vs what is happening?
Use words.

Seems unrelated to zsh as it happens to me too and I’m using bash. My mistake, watched your video again and see what you mean, but the there is weird behaviour upon reopening the terminal, on the second opening it shows:

This is not something I’ve seen before.

Also may or may not be related to this bug: 455324 – Terminal open/closed state is incorrectly restored

these, by default zsh using profiles
are the most annoying thing in Manjaro KDE … to me

A very bad design decision, if you ask me. …

Why do ‘Youtube’(?) vids appear at the end of the example?

It’s true, sometimes Dolphin’s terminal doesn’t load properly - with zsh I notice this… but as usual, today I can’t replicate it (maybe my recent rebuild solved this).
Quite often after I did F4 I had to type zsh to get it loaded.

Anyway, after that video, I think we need a nice shot to show why we love zoxide in a terminal in Dolphin, especially when we’re looking for some TV show to delete: 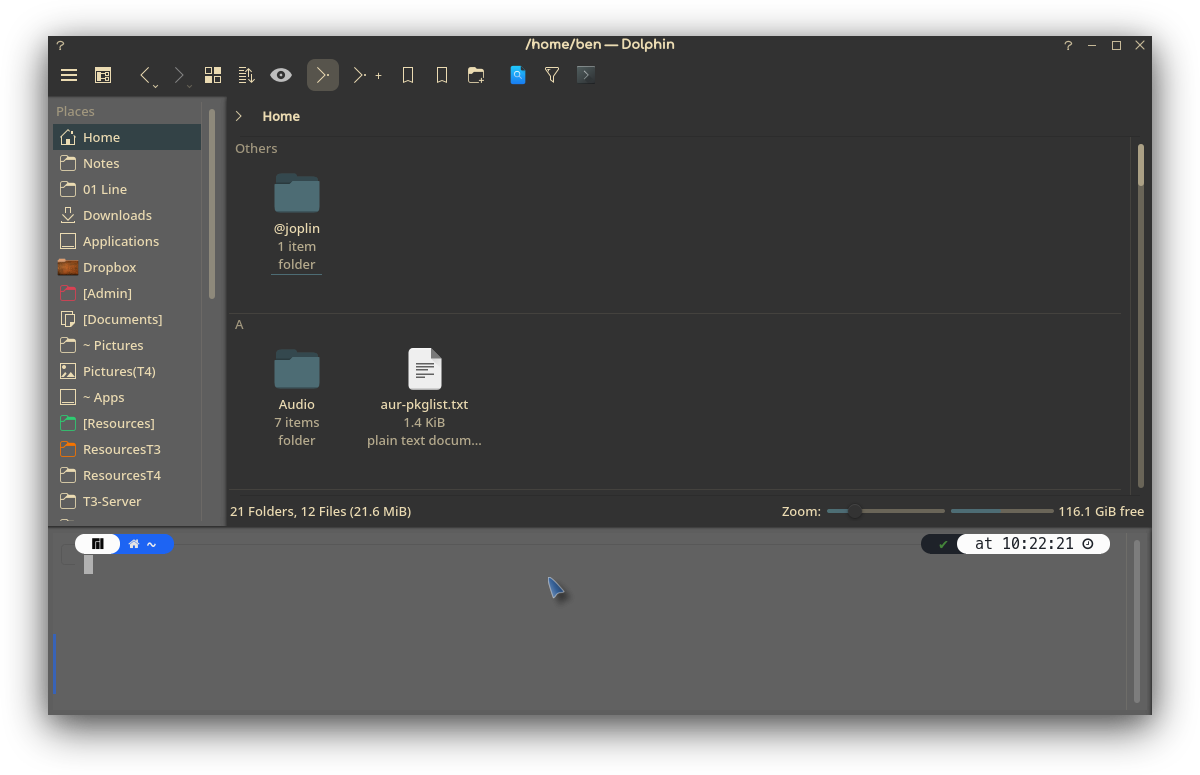 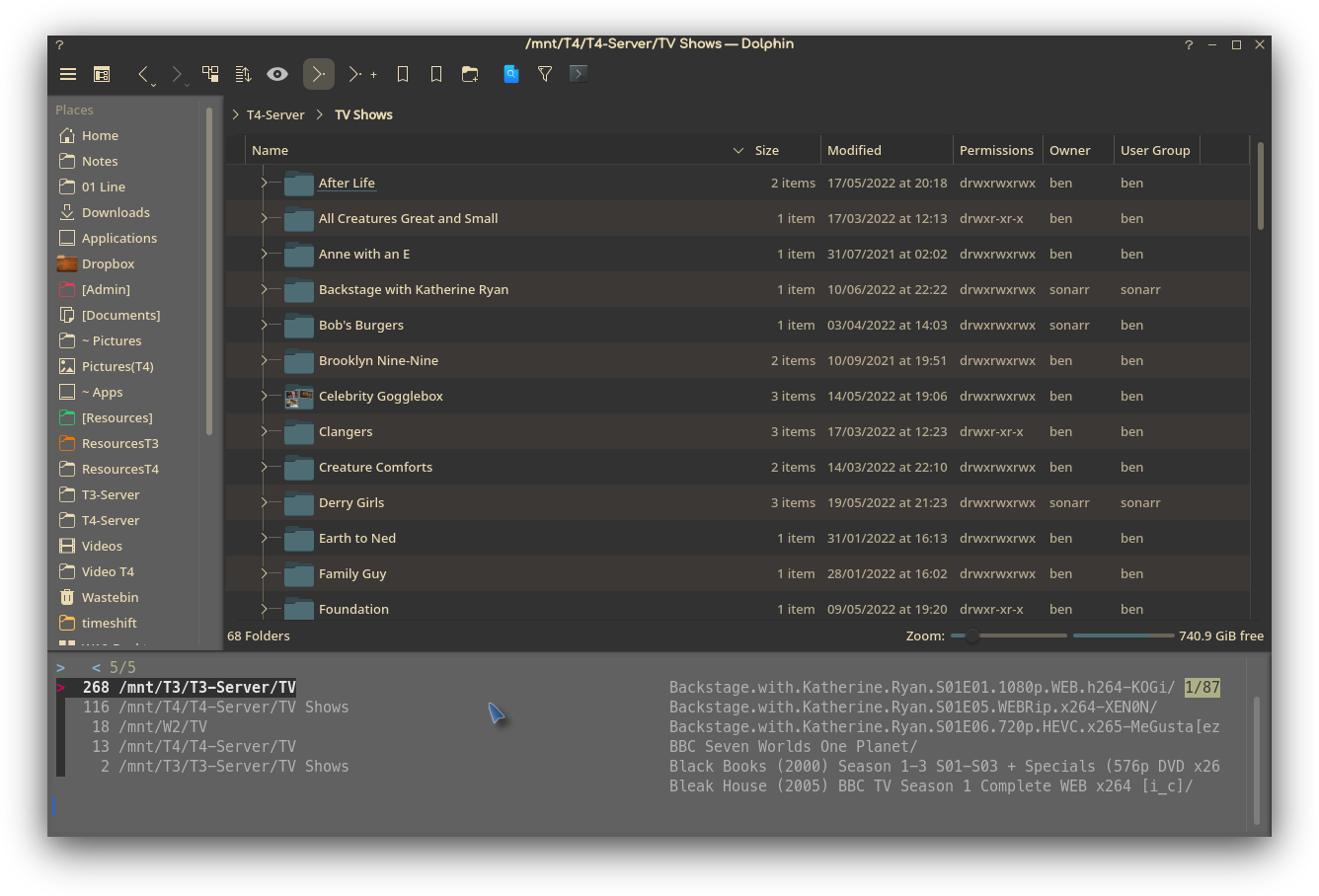 But sure, OP is correct.

There’s also another issue I had with Konsole which comes up if I resize a window:

So let’s ignore that, coz I don’t know how to fix that either (and that is the same with Alacritty, but not with KiTTY).

This doesn’t help this thread.

And I was mostly just voicing my opinion about the Konsole profiles in Manjaro KDE.

and @eddier should perhaps go over the context of this again …

I had the same issue as the OP - and I think it’s something related to ‘instant prompt’ setting in ‘p10k configure’.

Something I never had with KiTTY - so it’s not a Dolphin or a Konsole issue. So this does help with this thread.

The solution I found was something I didn’t quite understand when doing the configuration the first time - that is the instant prompt. When I set it to QUIET, I found the prompt loaded fine in Dolphin - it’s a while ago, I just changed it to remind myself.

So the solution, open Dolphin hit F4, make it bigger…
run p10k configure and at the end choose ‘QUIET’ for the prompt. 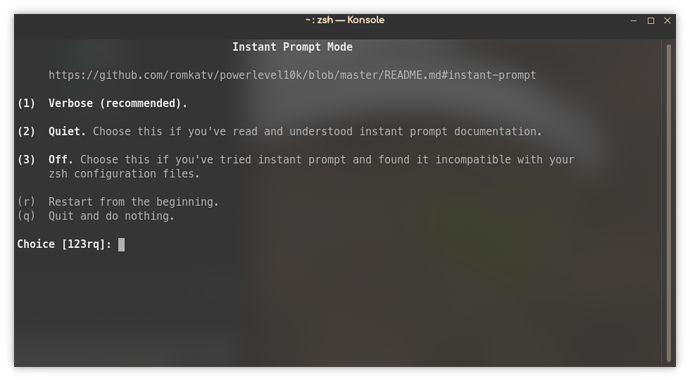 This is due to how different shells interpret different sets of chars.

I suppose Dolphin is using the Konsole engine and this engine can be configured with different interpretations of input - that is bell, lineterminator, newline et al. - which in turn may be interpreted wrongly and thus creates the described inconsistencies.

What I am really saying is - configuration.

I tried powerlevel many moons ago and dropped it because it didn’t work the same way in TTY - you could make it work by implementing framebuffer for konsole but that required setting up a tty service which then created other issues - so I dropped it.

The only prompt config I have come to appreciate is the git prompt - telling me the status - and with oh-my-bash - powerline and zsh has become obsolete to me and I returned to bash.

But even using Plasma I don’t use Dolphin either - I have completely customized my Plasma setup to the bare necessities - and comparing to my previous ‘dislike’ for Plasma I am even beginning to like it.

This is not a new issue, but the known issue from a long time ago. It wasn’t fixed yet.

But there are other tricks:

There’s also another issue I had with Konsole which comes up if I resize a window:

That is the known bug of Zsh with powerlevel, but Fish shell with tide (like Zsh powerlevel) has no issue.

tried it and it works.
this suggests Manjaro could make changes to work properly out of the box.

I think it’s up to us to set up our own zsh prompt… anyway, I’d strongly recommend KiTTY because it’s really pretty good - I’ve loved Konsole for a long time, but it’s not getting too much airtime ATM.