I would like to configure the printer to save scanned images to a local SMB share. It appears from Brother documentation that you need to use brscan-skey tool to configure that. I installed the driver and scan tool from AUR.
However, when I type brscan-skey in the terminal, I get “Command not found”.

I started and enabled the service with systemd (nice hint found in Arch Wiki), which didn’t help though.

Check and see what is in /usr/bin/ by listing the files owned by the package:

EDIT: It looks like everything is installed to /opt/ other than the services and license.

There’s a system and a user service for some reason. Did you enable them both?

What’s the status of both services?

when I enabled the service not typing sudo, I was asked for the password, so I guess just system?

EDIT: It looks like everything is installed to /opt/ other than the services and license.

…and the service creates a new user whose $HOME is located at /srv/brscan-skey (like, wtf, never seen anything like it)

There’s a system and a user service for some reason. Did you enable them both?

How did you know there’s also a user service - and is it needed to work?

How did you know there’s also a user service

I looked at the PKGBUILD.

… which led me to the Brother page:

Make sure you have installed the scanner driver (brscan4 or brscan5).

Please edit your previous post rather than reply multiple times in a row. I’ve merged your posts.

Make sure you have installed the scanner driver (brscan4 or brscan5).

But I do have it installed.
…And, even if brscan-skey did work, I still haven’t found how to use it to save the scan to an SMB share.
So far, I’ve used SimpleScan for Scanning from the PC. I can’t get it to scan multiple pages from the ADF though. That gave me the idea of trying it while initiating the scan directly at the printer, setting the device up to make multiple-page- PDFs.
However, that’s a goal separate from the one of saving to SMB, meaning I don’t need to do anything from the PC to make a scan.

Maybe this will help: Configure and use the Scan Key Tool (Linux)

Either run /opt/brother/scanner/brscan-skey/brscan-skey or symlink it to somewhere in your $PATH like /usr/local/bin/. Note that the AUR package uses a service instead of autostart.

I have tried this, nothing happens when I run it:

At least I managed to make XSane scan me all the pages from the ADF and save as multi-page-PDF, so there’s a workaround. Would have loved to make that button do something though

I’d like to try a firmware update. Version E is installed, but the latest version is L. When downloading the latest firmware, one is asked for the PC’s OS, and only Win and Mac are offered. The printer does have a web interface, but I can’t tell if it actually offers a firmware update. There seems to be an interface for file upload, but it’s called “Firmware download” and is located under the “network config” menu: 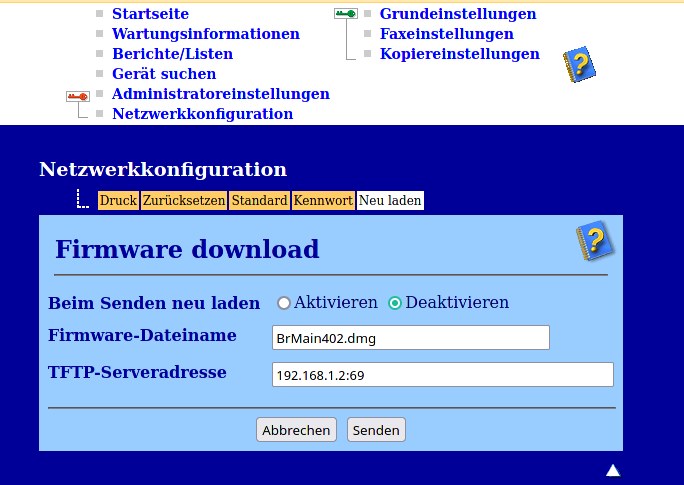 Since it asks for a TFTP Server address, I installed Tftpgui on Manjaro an placed the firmware file downloaded from the Brother page in its root. This is the file offered when you choose MacOS (because Unix, I dunno). So when I press “send” it briefly says “data updated successfully” and then displays the above screen again. On the start page, it still says Firmware version E though.

EDIT: I downloaded the Windows firmware file, it’s an executable, i.e. not the firmware itself, but a tool that downloads it for you. I ran it with Wine, but apparently it can’t use Manjaro’s internet connection for some reason, so it asks me for a proxy server…