Hello all, I’m new here but not to arch, I’m kind of a beginner though. I started with Linux Mint cinnamon since when the version was 18, and I’ve used it for about 5 or so years. My friend of mine said, you should try Garuda. He said, everything is GUI. I have never been an arch user before, but I said, sure I’ll try it. I’ve used the distro called Garuda that I like, it’s arch based, and the flavor is cinnamon about 6 or 7 months ago, but they haven’t had a maintainer for cinnamon for a little while, probably a month or so. So, I went to Garuda KDE Gaming Edition. And that’s what I had. I’ve had a few problems with Linux Mint, mostly the grub/bootloader error. And my friend knew that, but I said ok, but everything worked out fine. It installed fine, even the bootloader, (which I thought might hit me again) but it didn’t. I installed Garuda cinnamon and Garuda KDE and I haven’t had an issue. Until now, when I was trying to install Manjaro Cinnamon. I had the same issue, the grub/bootloader error. My friend and I were trying to figure it out. Been trying for about 5 days now. We tried erasing the partition, manually installation, we even tried replacing the partition. Nothing worked. We tried a few links saying they fixed it that way, for me, didn’t work. So, then I said, well I’ll just go back to Garuda since it worked. But I installed it, but that dreaded bootloader hit me. So, I’m dumbfounded. So, that’s why I came to the forums. I know you guys don’t do Ubuntu/Debian, but I’m going to post/code in what I did to get Linux Mint installed. You can take it out if it’s not suitable for this. Sorry if it is. This is what I did…

I know you are probably going to ask me to put in the command ‘parted’, so here it is…

When everthing is installed apart from Grub,
then you must install grub.

Use the Manjaro USB stick, boot from it, chroot into the system and then:

You mean restart or stay after the bootloader fails? I’m not that familiar with chroot. Sry.

Boot from the Manjaro USB stick, manjaro-chroot --a on console and then execute the commands above.

When installing Manjaro on BTRFS, then root is normally at /@/ and /home at /@home/ as subvolumes. Roughly saying it is working like a partition; you can mount a subvolume like a partition.

So when mounting btrfs it must be like that:

Then chroot with the manjaro-helper script:

However there is also a great article on the wiki: GRUB/Restore the GRUB Bootloader - Manjaro

I rebooted, went back in the installer, did what I always do which is delete the drive and left the defaults like swap and ext4 and didn’t choose btrfs. I’m used to ext4, I just thought btrfs was quicker and better and Garuda uses it.

And that all… I rebooted and still no bootable device found. So, I went back into the live usb and that’s where I am now.

Could not prepare Boot variable: No space left on device

Could you check if the partition is full? Reformat it and try again?

I restarted and went back into the installer and tried again and when it got to the partitions part I said to erase the disk and I left the defaults like it was with no swap and ext4. But I will try again and see if there is anything different. But I just did it, so there shouldn’t be.

Ok, now what my partition tab says when I’m getting ready to install, like the summary is what I have in the image below. 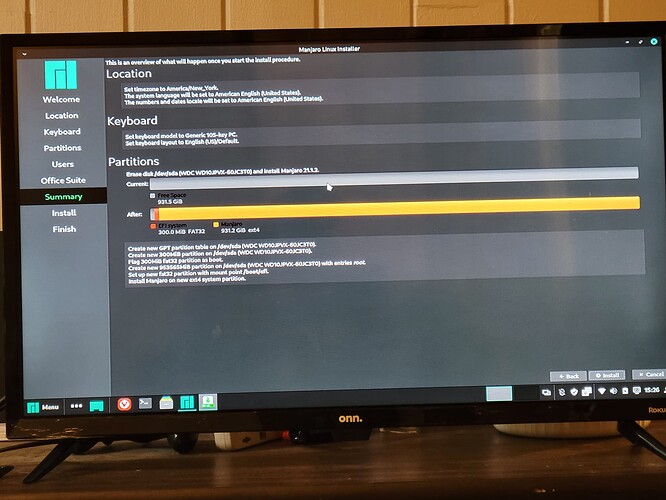 I’m about to do an install.

Edit: The reason I have all unallocated space is I did a fresh drive with gparted. I know I tried that before with my friend that was helping me.

you have to ckeck option UEFI motherboard before

I haven’t had secure boot enabled for years (about 5 yrs or so sense getting this laptop), ever sense I was on windows 10, it’s been disabled. I don’t have CSM. I have UEFI enabled, legacy disabled. And no other boot options that is in that link. I will post the commands that you referenced.

So the problem is clearly between efibootmgr and your UEFI.

What makes me think are these entries:

It could be possible that your UEFI NVRAM has no space left for new entries… You can delete unnecessary entries with:

If you want to remove entry Boot3000 try

I did them all except Boot3004, should I do that one as well? And then restart and do the installation again?

If you want to remove entry Boot3000 try

And then restart and do the installation again?

I would first suggest to re-run the grub-install procedure, like done before:

Ok, idk what to do next. I put in these commands…

I haven’t restarted yet.

can you check if there is enough size for /boot/efi ?