Boot from SSD on Raspberry Pi 4B 8GB RAM

I would like to buy a Raspberry Pi 4B with 8GB RAM in combination with an Argon ONE V2 Case + Argon ONE M.2 and install Manjaro ARM with KDE Plasma on the SSD. Does the Raspberry Pi 4B already offer support for boot from USB SSD in the base?

Alternatively, how can I set up support for booting from an SSD?

Simply flash the downloaded image to the ssd instead of a sdcard and put it in the pi4 and boot it up (with out a sdcard inserted in it).

Thank your of your reply!

One more thing to note is that the usb ssd can cause interference with wireless devices such as a mouse or keyboard so an usb cable extension will be needed to move the ssd farther away from the pi4 board if you plan to use a wireless device.

I use the Argon One and M.2 cases. I have no issues with using the internal M.2 SSD but I do not use bluetooth, so I can not say if it interferes with it. But WIFI seems to work fine. Power consumption is a consideration. And to that end, I use the Kingston A400 M.2 SSD. They have a lower power consumption than other SSDs which are more focused on speed. The A400 is about as fast as the RPi4 can go anyway.

If you want to use an external USB device (ssd), make sure to use a powered USB hub. If you run low on power, you can corrupt your filesystem.

Just to make sure: So I can just take a flash drive with the Manjaro KDE Plasma ARM ISO image installed, insert it into the RPi and install Manjaro on the SSD in the same way as on the desktop?

no, you download the image and write directly to the ssd. then just boot with the ssd plugged in. 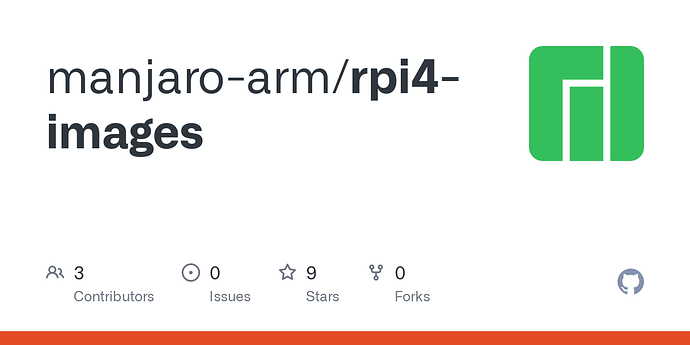 Contribute to manjaro-arm/rpi4-images development by creating an account on GitHub.

no, you download the image and write directly to the ssd. then just boot with the ssd plugged in.

thank you of your reply.

the kde install screen feels a little slow to popup/open just wait it out.
gnome & xfce are not bad, have yet to try mate.

it’s not a install in a sense, it’s of just setting settings kind of deal.

Can you still boot to the SSD and run manjaro from that with the SD card still in the case?