I’ve been on Manjaro for some time now, maybe a year, and it was my first steps with linux when I did it.

So now, after I’ve learned some more, I decided to go for a fresh start.

I freed up some space on ssd and installed a new instance, it came with kenel 5.10, so I installed 5.12 and booted into it.

Every time I do though, I get just a black screen.

Any ideas on what’s going on?

You haven’t told us anything about your hardware, but I am willing to guess that you’ve got an Nvidia graphics adapter. And in that case, you’ll find plenty of heads-up warnings here at the forum, as well as explanations on how to install the proper Nvidia driver again.

That said, if there’s no compelling reason for why you’d want the 5.12 kernel, then I’d stick with 5.10 if I were you. It’s a long-term support kernel ─ it’ll be supported until at least 2024.

Sorry about not mentioning the hardware.

Thing is that on the first instance of manjaro, which I’m using to write this message, kernel 5.12 works perfectly fine, difference from 5.10 being that zero fan RPM got finally implemented for AMD gpus.

The fact that it’s working on one instance but not on the other makes me think that I’m missing something.

It’s most likely a problem with i915 drivers, more specifically the new feature being introduced by Intel devs - VRR. A few others have faced the same problem: booting linux makes screen go completely black and not even a display manager is showing up. Remote ssh’ing works, and most likely, the kernel and other apps have no idea that the screen is black.
Intel introduced VRR on gen8+ (or a similar gen offset) integrated graphics, but it applies for more than it should. Results in completely black (unlit) screen.
All other ppl had this in common: integrated Intel graphics.
Arch has introduced a patch on their distro’s linux 5.12.5 (or 4?) package to workaround this issue.
Also, you (as an owner of Intel+AMD GPU combo) may want to try circumventing Xorg completely - switching to wayland DM , wayland session. I’ve read reports of that working well too. Wayland for some reason (as someone on reddit said) works fine.

Thanks for the reply. I appreciate the information and the effort, but how would that explain the fact that one instance of the same os on the same PC does boot fine with kernel 5.12 and the other one doesn’t?

Can you still switch to another TTY with the black screen? f.e.: CTRL+ALT+F2

Try booting with nomodeset kernel option to access tty’s in your OS. Also, what moson said, but provide output from both PCs (the one that works and the one that doesn’t)

I have no idea how to get the full response text out of that terminal, so here’s the best I could do, a photo: 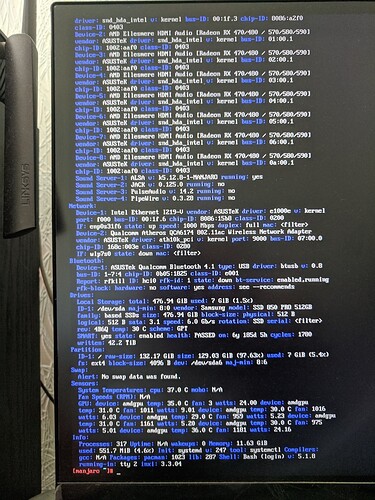