Black screen after grub on boot

Hello, long story short after a proper shutdown I removed the ram sticks and reinstalled them. After that I wasn’t able to boot again. Didn’t had any issues before that. The hardware works fine because I can access windows with dual boot. After logging in I don’t have internet access, the only thing I’ve managed to do is reinstall my kernel but it didn’t change anything. From grub I tried the fallback option but it’s the same. I have searched for solutions in the forum but I didnt had any progress. I’m pretty sure it’s something very simple, I’m trying to avoid the options with external USB and chroot.
My current kernel is 5.4.116
When I boot it usually stops here: 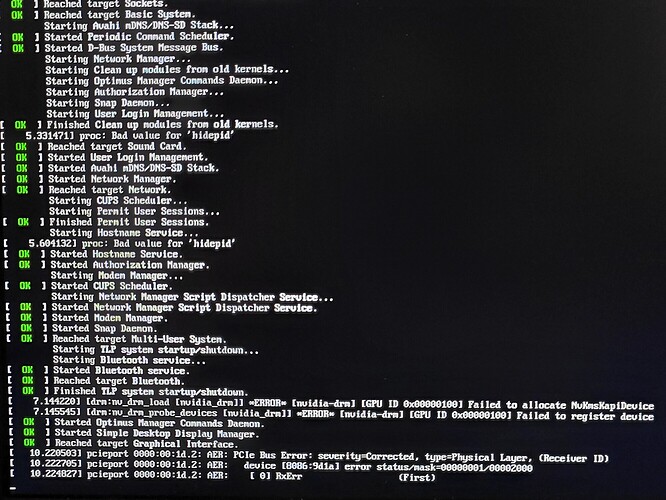 I’m afraid it doesn’t seem like you’ll be able to avoid chrooting any longer. Yeah I hated doing it, especially the first time, but luckily manjaro-chroot makes it easy. Thanks team!

From the error it looks like your GPU, but since you say it works with windows, it might just be the driver. So start up a live environment, and if that works fine, then I suspect it’s the driver, in whihk case you’ll have to do the chroot.

Thanks for the reply. I’ve had a similar issue in the past but in that case I was able to update the drivers, now I’m unable to do that since I do not have internet connection. Currently I have both intel and nvidia drivers installed, but I was using a program to have the nvidia gpu active all the time. Now I could uninstall nvidia drivers and try to boot with intel gpu, but I’m not sure if it would work and I dont wanna make matters worse.

In that case, check and see if there is an option to disable nvidia in the BIOS.

Or, and I ave absolutely no idea is this’ll work or render your computer useless, but you might also be able to boot into the Live ISO environment and uninstall the hybrid drivers. But, once again, I don’t know if this’ll work.