Autostart script by booting not working

Hello.
By default, wlan is activated immediately after logging in. I want to ensure that this is not the case, so I’m able to switch on the opensnitch firewall first. If possible also automated in the script during startup. On research I tried the following on the picture, but no change happened. 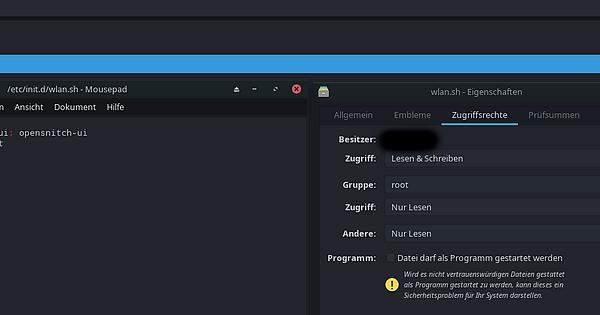 Edit:
I have created a sh file under /etc/init.d/ and entered the following commands:
nmcli radio wifi off
pkill -15 opensnitch-ui; opensnitch-ui
sudo opensnitchd start
The group is root.

Which procedure is recommended? If the three commands were used successfully, I would manually reactivate wlan after start.
Many thanks in advance

If I understand your task correct - you want to avoid the network being activated until some point after you have logged in.

What is the point of this? I mean you should be able to run opensnitch as service as well as the network?

Actually it would be enough for me to have the firewall running immediately after startup, but I just can’t get it to work.

Have you tried firewalld from the repository?

Opensnitch works, but only if it is started manually. I would like to automate this. Actually I only want to manage the outgoing traffic by single program. As far as I can understand it, this is not possible with firewalld.

As far as I can understand it, this is not possible with firewalld.

You can define outgoing rules in firewalld as well. I have never had the use case but it is possible.

Another option is to create a user-group which is blocked by firewalld and run the application as the mentioned user.