In the last 6 months I am trying to make Manjaro Linux my default/main OS.
My daily driver sort of speak.
Now that Steam is so good and Bottles can handle my Diablo needs, I see no reason not to.

But last month I had the misfortune that my onboard sound card Failed/Died somehow and
I was forced to buy a new PCI-express sound card.

When I play a video on Youtube, it all sounds normal/OK.

But when I play an MP3 on Clementine or a video file on SMplayer, it sounds distorted.

In order to give you an exact idea/picture of what I am hearing, I recorded a small
10-second sample with my phone and I uploaded it as an unlisted video on Youtube on this link: 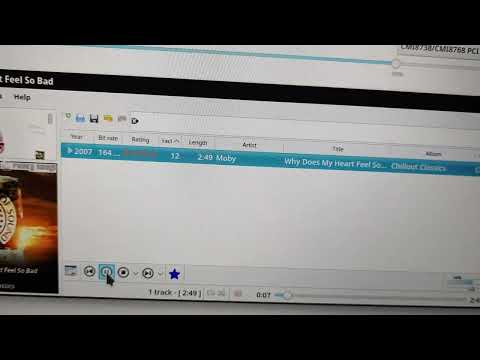 The fact that it sounds just fine in the browser/Youtube scenario,
makes me think that I might have misconfigured something.
Is there a way for me to do a TOTAL RECAL or RESET of my sound setup on Manjaro?

If you need more data from my side, please ask.

PS:
I have disabled the onboard Realtek Sound card via the BIOS,
since it was unusable anyway.

Your sample sounds pretty much like slow motion audio…

So if in your browser everything works correct, then there must be an issue with smplayer/clementine or pipewire/pulseaudio.

Maybe the problem is just that both are running:

Disable one of them:

I tried both commands but the distortion remains:

It is a user service and not a system service, so without sudo…

Thank you for the tip megavolt

I got these messages:

How the heck is that happening?

Your sample sounds pretty much like slow motion audio

If audio seems to be playing at incorrect speed it would be either:

and the Sample Specification for PulseAudio sink outputs

You are right on the money nikgnomic.

The first command shoes this:

When the sound is problematic I see this output:

When I start playing the Youtube video simultaneously and the sound is normal,
the output changes to this:

reconfigure the alternate-sample-rate from 48000Hz to 44100Hz

I would like to thank you @nikgnomic and @megavolt for your time and efforts.
Your tips helped me to learn a little bit more about how the audio system works in Linux.

Unfortunately I was not able to fix the issue. I tried to implement the solution but no luck.
I even tried different Live CDs to test the audio.

In all the cases the Audio playback issue was as problematic as described in the original post.

I was thrown back to the fist “dates” I had with Linux, in the early 2000s
when I was trying distros like Mandrake, Suse…etc.
It was the time of software-assisted 56 kbps modems and software-assisted onboard audio cards.
Which naturally did not have any drivers so the experience was like a silent movie of the 1920s.

So I decommissioned my problematic motherboard (Asus PRIME-X570-P)
which I will reuse as a home NAS or something.

I bought a new motherboard (MSI MAG B550 TOMAHAWK) which seems to work OK.

I think they even both have the same Audio Codec / Chip.

Anyway now my Audio device setup looks like in the screenshot, and it plays audio and video fine.
I guess the new audio chip is named “AMD Starship/Matisse HD Audio” now,
and not Realtek… or something like it was on the old one. 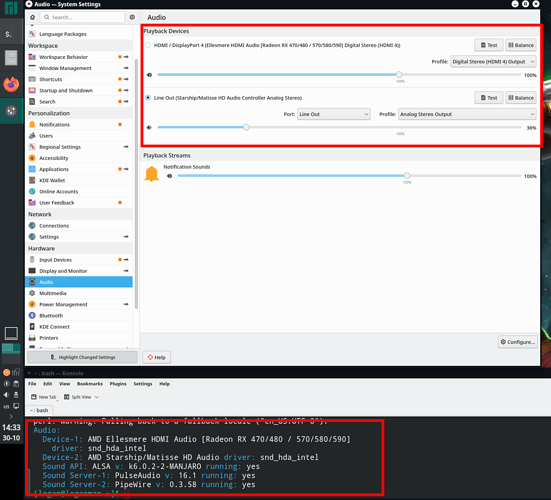 I will leave it as is now for fear that if I cough or even look at it a funny way,
it may commit suicide just to spite me.

Thank you again for your time.

PS:
I don’t know if this counts as a “Resolved” type of conclusion.
I guess not because the CMedia card was working fine on Windows 10.
I just could not get it to work on Linux.

MSI specifications show that under the generic AMD Starship/Matisse name this motherboard has a Realtek ALC1200 codec, that can support studio quality audio up to 24bits/192kHz
But for real world use, it can run HD audio (24bits/48kHz) easily with minimal additional load on the rest of the system