Audacious or DeadBeef on Xfce?

I used to run Audacious under Xfce as a music player, mainly because of the better sound in my opinion. But since the surface was changed to qt, it looks terribly dirty with GTK. I don’t understand why this is still included as default player in Xfce-ISO. Visually a total foreign body, the buttons are hardly visible and so on. And please do not recommend the old 3.something version! In return I took a closer look at DeadBeef. But somehow it is much quieter. But if I raise the preamp a bit, everything sounds distorted and overdriven. The sources are mostly FLAC or 320 kbps mp3-files.
I would like to stay with Audacious, but this qt interface doesn’t work at all! DeadBeef seems to come very close, but the sound problem keeps me from doing so. Any Suggestions?

I think something is wrong with your setup/settings.
Sound for normal files is identical in Audacious AND Deadbeef, and increasing the preamp just pushes it to clip; Deadbeef has a few extra playback options which make it better for some things.

I’d suggest deleting your settings and testing vanilla again - for files that play back in Audacious and Deadbeef I detect no difference in levels (maybe you have Audacious set to compress music to make it sound louder…).

But since the surface was changed to qt, it looks terribly dirty with GTK.

I have now started with DeadBeef again with a blank configuration. It is still not as it should be, but I will stick with it. It is only strange that with the volume I am used to the Refler is already in the last third. But good. With ALSA it sounds better in my opinion than Audacious did so far. OK, thanks for the help @Ben!

@maycne.sonahoz I do not want to install kvantum for Qt, that has no place here …

If you are not using replaygain for audio tracks, check Deadbeef Playback settings and make sure setting for Processing is set to none

Audacious can read replaygain metadata and adjust audio levels, but that is usually turned off by default.
Audacious does not include replaygain scan function (not many players do)

I would recommend installing kvantum for getting QT themes adjusted too
but I also need it for qmmp ; qjackctl and qtractor

There is no need to limit yourself application-wise just based on what widget toolkit the developer chose. They can both look similar. I use both Deadbeef and Audacious. This is Audacious with KvAdapta theme: 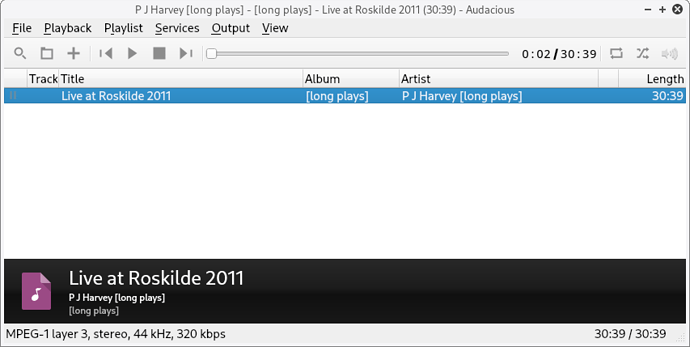 Another thought, do you have PulseAudio volume control - could Deadbeef be turned down in that?

Another thought, do you have PulseAudio volume control - could Deadbeef be turned down in that?

This is Audacious with KvAdapta theme:

I installed kvantum-qt5, added audacious to the applications - and it looks as modest as on your screenshot: blurred icons and an almost invisible volume control button.

There’s always the WinAmp option - but it appears tiny for me.