I’ve attempted to follow a few posts regarding this issue. I installed the Hybrid graphics drivers using the mhwd install process and attempted to install and initiate Prime or Optimus (some form of autobot). I can’t seem to get the Nvidia card to fire up. I really wanted to use it for gaming (Steam) and Blender.

Any help is appreciated. I can post any any info needed, but am a bit lost on where to start.
I’ve been running Linux for a while, but this is my first computer buy in about 10 years, and while the specs looked great on paper wrt HW, it has been a pain to setup in Linux.

Also, some other things to note:

To use the nvidia drivers normally you have to type prime-run before the program you want to use,for example

Since 470 nvidia drivers,you don’t have to do anything in Steam (I think in blender neither),you just hit play and Steam will use the nvidia card automatically,in case it doesn’t work right click on the game on steam and in the launch options,type

that way,the game will be force to use the nvidia card,but this is no longer necessary. 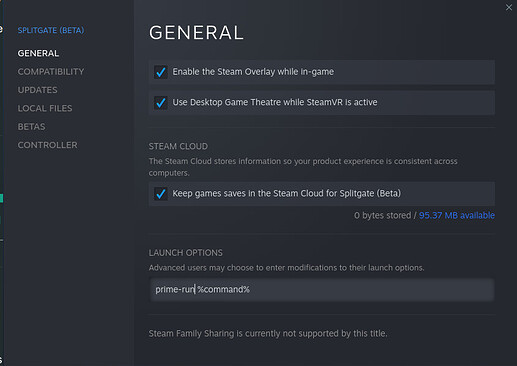 Thanks for the reply. I had an update happen last night that must have fixed something slightly. I know there were a few kernel updates (I think I’m using the LTS 5.10.X kernel atm). Anyway, whatever updated seems to have now fixed most of the prime-run errors I was having and I now have an entirely different issue. Core dumps…

I can’t seem to get a stable Blender run. I’ve got a fairly massive scene, but I was able to compute on it with this machine a few months ago. I’ll check Steam and see if any of the games here are having issues as well.

What exactly do I need when it comes to the GPU switching? mate-optimus and/or nvidia-prime? It seems I also have a mhwd-nvidia-390xx showing as installed. Is this an issue or just a script for install of the 390 drivers?

Is this an issue or just a script for install of the 390 drivers?

Just a script for people who want to install 390,you can ignore that,for you card the most recent 470 is ideal

What exactly do I need when it comes to the GPU switching?

For that you need optimus-manager,you can get more information here 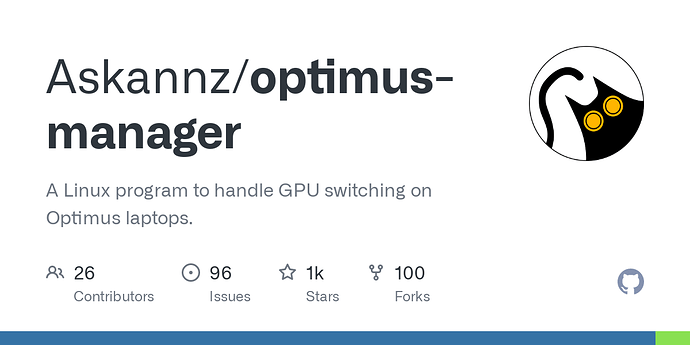 You just need to install optimus-manager from the official repositories,edit the file in /etc/gdm/custom.conf and delete the # where it says

and install gdm-prime from the AUR to replace gdm package,then you can switch cards with the commands 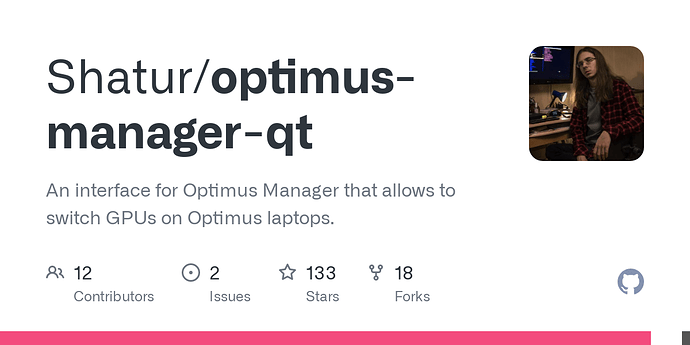 GitHub - Shatur/optimus-manager-qt: An interface for Optimus Manager that allows...

then you can just right click on the systray what graphics card you want. 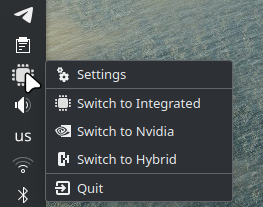 Anyway, whatever updated seems to have now fixed most of the prime-run errors I was having and I now have an entirely different issue. Core dumps…

I really don’t get why you have son many problems,just in case type in the terminal this to list what drivers you have

and this to get more information about your system

Ok, gonna try it. I guess I don’t quite understand why gdm-prime isn’t in the repos…like a 90 % clean solution.
Do I need to do anything for the package manager to recognize the install?
Look like a basic shell script atm.

Do I need to do anything for the package manager to recognize the install?

To recognize the install? what do you mean?

You just search in the Add/Remove Software (you need to activate AUR first in the preferences) and install it from there,when its done reboot and you should be able to switch cards easily. 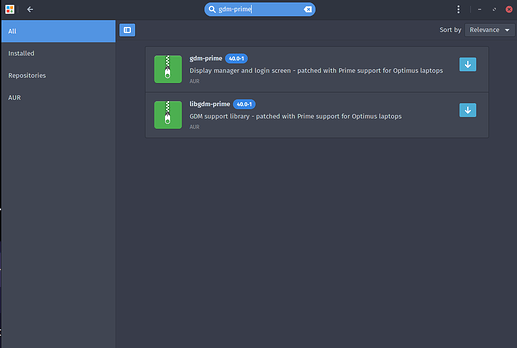 That actually I don’t understand neither,but you can request it to Manjaro devs to include in the official repos

Ah! The hidden repo! Thanks so much. No one mentions this repo hanging about.

I’m new to Manjaro coming from openSuse, for the reason of forums being down for over a year. Kinda reminds me of the Pacman libs in openSuse. Now I feel dumb.

Oy, back at it again. So I had a few days off things working. I kicked off a session of hybrid graphics last night, and then switched back to a “normal” proc based session. When the login happened in this mode I noticed a few things were odd.

My panel was missing the package manager, optimus-switcher-qt, and manjaro icons and my toolbar had moved to the bottom of the screen. I’m not sure what happened? This is what was plaguing me using openSuSe. A small update happens to an nVidia/AMD kernel or the gnome desktop session and bam…back to a non-working nVidia card.

Any help diagnosing why things are gone all of the sudden would be appreciated. I don’t remember doing any updates yesterday.

I don’t use GNOME so i’m not sure what happen,but did you verify if the icons are disabled in the tweaks gnome manager?

Ya, I don’t see an option, but I even tried going as far as resetting tweaks and reinstalling all nVidia graphics card related drivers. I don’t get panel icons any more for basically any daemon other than than basic settings menu. Steam, pamac, etc are all just gone.

Do you find KDE to be more stable when it comes to drivers and settings? Might be time for a switch.

First installed gnome & had nothing but trouble. Installed xfce & now it runs great.

Some people says KDE is unstable,some people says not,for me is stable I don’t have any problems,you can make it similar to GNOME if you want like this,also not having problems with drivers,for reference I have a Dell 7567 with a i5 7300HQ and 1050 Ti.

I can seemingly still switch the settings via command line, but am still a bit mystified as to why all my daemon icons just disappeared.

Definitely sounds like a GNOME applet,tweak issue or something,not necessary the system is broken.

Did you try this?
https://extensions.gnome.org/extension/2890/tray-icons-reloaded/

Got it. Some extensions somehow were turned off. I had to launch the gnome extensions manager and re-enable the “AppIndicator and KStatusNotifierItem Support” and disable “Dash to Dock”. Now I see everything again, where it should be.