Any way to force enable dark theme for Qt apps?

A few months ago I built my own gaming PC and installed Manjaro Gnome on it.
I like Gnome and KDE equally, but every time a new Plasma version comes out, I can’t help but go back to Plasma for a long while.
But I found something very disheartening: color themes don’t seem to change for Qt apps at all, regardless of the theme used, and regardless of the amounts of reboots.

It seems like this problem is exclusive to Qt apps, there is no such problems with GTK apps.
Anyone knows why?
And how to solve?

You need to go to ‘Colours’ in System Settings

I already did that, as you can see on the 3rd screenshot.
If it would have worked from there, I wouldn’t be asking this question…

Turns out that the reason why Qt apps are ignoring Plasma theming is because apparently Kvantum is in charge of the theming.
Just changed to a dark theme in Kvantum, and the theme changed.

Still not ideal since the changes excludes window borders, but at least Qt apps are no longer unbearable to look at.

Changed the category, as the support is not for “KDE Plasma”, but for “GNOME”
Marked the solution too.

The problem was encountered while using KDE Plasma, which is why I posted under KDE Plasma.
Qt apps were dark under GNOME.

GNOME is not KDE PLASMA, so no it was the wrong category.

KDE PLASMA is another desktop environment.

Oh wow, of course I know that GNOME is not KDE Plasma.
I was talking about literally using Qt apps under KDE Plasma, not GNOME.
I thought I clearly stated that from the very beginning, and even added screenshots (with spaces in links, otherwise the system wouldn’t let me post them) to prove this is under KDE.
Exactly this part:

I can’t help but go back to Plasma for a long while.

I repeat: Qt apps work fine under GNOME, they didn’t under KDE.

For this reason, I’ll change the category back to KDE Plasma, because it has nothing to do with GNOME.

A few months ago I built my own gaming PC and installed Manjaro Gnome on it.

But I found something very disheartening: color themes don’t seem to change for Qt apps at all

It seems like this problem is exclusive to Qt apps, there is no such problems with GTK apps.

apparently Kvantum is in charge of the theming.

To me that smells GNOME desktop and Kvantum. This wasn’t clear to me. 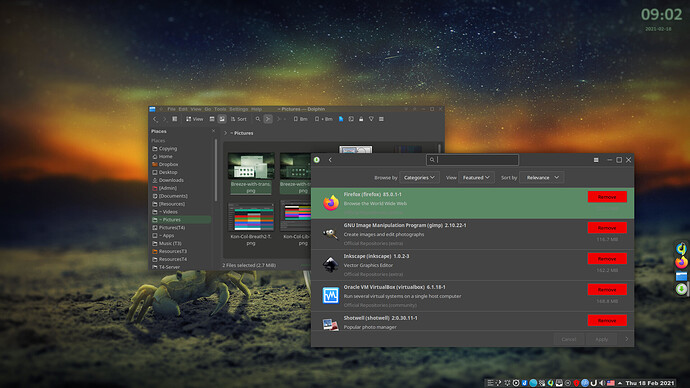 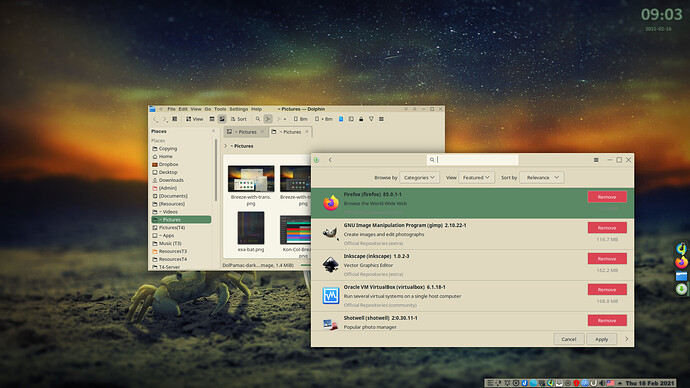 No issues here… not using kvantum at all. Just breeze with breeze GTK set in Application Style.

I’m not a native speaker of English, and at that time I was writing with stress attached to me because I was trying to get it fixed for many hours, but absolutely nothing worked.

To re-phrase it:
I initially installed Gnome, then I installed Plasma, and changed to that.
After changing to Plasma, I noticed that color themes don’t get applied at all to Qt apps, but GTK apps don’t have this problem.

A couple of hours later, it seemed like Kvantum was the theming engine instead of whatever Plasma natively uses.
Not sure why, because I can’t remember to using Kvantum in the first place, I never even heard about it until now.

Know how to turn off Kvantum?
Answer to that would mark this question as solved.

Ok now it is a little bit clearer.

Kvantum is not part of KDE.

Maybe you installed the KDE Plasma desktop OVER the GNOME desktop?
If you did that, in my opinion this is a really bad idea, because you would install a pre configured desktop for GNOME, then everything is setup for GNOME, installing another desktop environment over that would mess things up a lot.

Maybe you installed the KDE Plasma desktop OVER the GNOME desktop?

Yes, I did that.
I thought Kvantum was part of KDE, the “K” part fits in very well like they did in the old days before KDE 4 when every app had to start with a K, or have a K somewhere in the name.

If you did that, in my opinion this is a really bad idea, because you would install a pre configured desktop for GNOME, then everything is setup for GNOME, installing another desktop environment over that would mess things up a lot.

I’m aware of this one too, though it used to be way worse 2 decades ago (long before Ubuntu, when we were all using Red Hat and Mandrake, great times!) from what I remember.
Over the past couple of years I installed Gnome over KDE multiple times before, but problems were rather minimal.

Seems like installing KDE over Gnome is still quite NG.

If you know what and how to reconfigure everything it’s OK. But did you research what it would require to convert a GNOME Manjaro to a KDE Manjaro?

I’m going off experience most of the time.
Like I said, KDE → Gnome was always with minimal problems (probably the most notable has been Caffine taking over Gnome’s screen time out functionality, but no big deal).

Last time I did Gnome → KDE was in 2009 or something, I used Cinnamon, MATE, Unity, awesome, i3, IceWM, and Xfce casually, but I’ve always kept my main work on KDE until Gnome became decent again a few years ago.
But that has always been KDE → Gnome.

Kvantum is a Qt theme manager for GTK environments. Within KDE, Kvantum will do nothing.

Maybe installing directly KDE from the start would be a better, smoother, lighter experience.

I was considering to doing that once I get the time for that.
Re-installing an OS from 0 is pretty time consuming, especially if you’re working a full time job during weekdays, and then travel throughout the country to explore new areas.
I prefer to be off PC during weekends, considering I’m already using a PC all day during weekdays.

I get it. For months I could not decide between KDE, Cinnamon and Gnome.
I had a triple boot until I finally made my mind.

I tinkered the 3 environments until I found the setup I like.

I finally found the criminal that was still using Kvantum under KDE despite even uninstalling it.

Under /etc/environment, remove the “QT_STYLE_OVERRIDE” variable.
I took a look at my laptop running Manjaro (except it was running KDE from the start), and noticed after first doing “plasmashell --help” on both machines, the gaming PC gave me a warning about the style override while the laptop didn’t, and then I checked in “qt5ct”, and found the variable in question.

Then using the following command, I found where it was defined:

On my laptop, that file was near empty (excluding some commented lines).
On my gaming PC, that file had quite a few variables, so I removed them all to match the file on my laptop, and rebooted it.