I’m on testing branch. Some recent updates (it could be a couple of weeks) messed up printing for good. Meaning, EVERY WHITE SPACE IS PRINTED AS A DARK GRAY. Since most of the document’s surface is white, I get dark gray, almost graphite papers, which are useless. Moreover, it uses up a lot of ink.

Here is photo of an example how it looks like. Mind you, in reality, the gray is MUCH DARKER than on the photo. 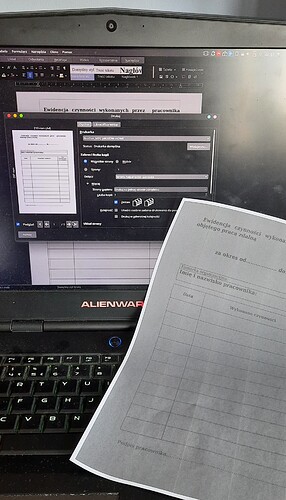 What I already tried:

Since I use my laptop for work and I need printing from time to time, this is a major issue that has to be solved.

What could have caused it and how to solve it?

Can you setup the printing driver again ?

I tried it, every time I chose defaults, and it’s the same result, no matter if I choose CUPS or driverless option. What does it tell us?

Which packages could influence printing?

I use the printer Brother MFC too, but I have no issue.
Maybe LibreOffice is the issue.
Try save text/document in PDF, then you print this PDF, does it work?

No, the issue is the same with pdf’s, however, I just noticed, that PDF previews show up dark, just like it is on print. This is suspicious and can’t be a coincidence. 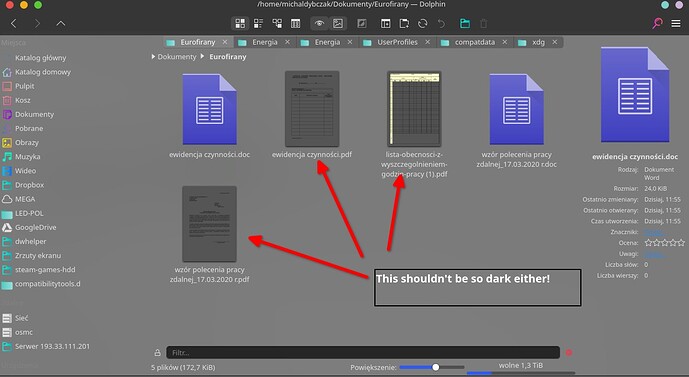 I agree. It seems something is wrong in your custom KDE system.

I agree. It seems something is wrong in your KDE system.

And on top of that, it’s not a problem with the user, because on a generic, test user the issue still persists. So this may go deeper. We are a step closer.

EDIT: Nautilus also shows this dark preview, so this may not be even KDE thing.

LibreOffice saved the PDF but it shows gray, right?

Did you check other white PDF that was not saved by LibreOffice?

I don’t think that LO is the problem here. One of the PDF documents was PDF from the start and was created on Windows 2 years ago (no idea how). I’ll try to create PDF in other app and see what’s happens thou.

EDIT: Some PDFs from the web, are printing correctly. This is confusing. If this was only a pdf issue, but no, other formats also suffer from this, but maybe LO is someone adding to it? Hm… Need to make some tests.

maybe LO is someone adding to it?

Which version are you running. LibreOffice got a update today in testing branch:

Hello community, Another testing branch update with some usual updates for you. [image] Don’t miss out on free shipping of our merch! Visit one of our shops Some of the Kernels got updated, including fixes for BTRFS regressions KDE Gear got renewed to 21.12.2 LibreOffice is now at 7.3 Nvidia published their first stable version of 510 driver series: 510.47.03 We updated Calamares to 3.2.51 The usual upstream updates including Haskell and Python

You may need to r…

Fixed it! Examine properties pane when image is clicked. In ‘Image’ section look at ‘color mode’. My images said ‘default’. Changed this to ‘Grayscale’ and now they all convert correctly in PDF. It is strange that importing a bitmap does not work...

I just updated the system and… it may be fixed. Now when I’m opening any documents in LO and saving it as PDF show correct preview (while old ones are still grayed).

Yay! Other formats now print correctly! So the today’s update fixed it!