Nvidia GTX960 with relatively low temps, before the update the fan was nearly always off in non-gaming usage.

Using Nvidia Settings I can control the fan speed but when I set Target Speed to 1%, it never goes below ~1520rpm. Seems there is some “always on” flag now active.

I see nothing different than on my end.

In Nvidia Settings i have set the default Thermal Settings to this:

And the PowerMizer to Auto: 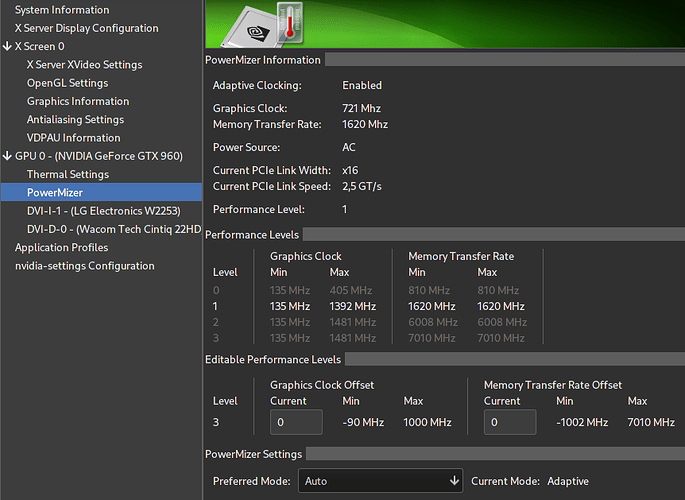 Is also true that on my /etc/X11/mhwd.d/nvidia.conf i use this in Section "Device"

And the Nvidia GPU Fan is at 0% in idle

Did you reboot the system and check without any app if the fan is off?

Everything except TripleBuffer and ConnectToAcpid in nvidia.conf are identical.
However in Nvidia Settings the fan speed is automatically set to a target of 45%.
This is the first time I’ve looked at the fan speeds for the GPU on this installation, so I can be certain that I didn’t manually alter any settings. I can alter the fan speed higher but lowering to anything below 45% has no effect.

Restarting the machine has the fan off, as soon as KDE windowing starts to load, it spins up. 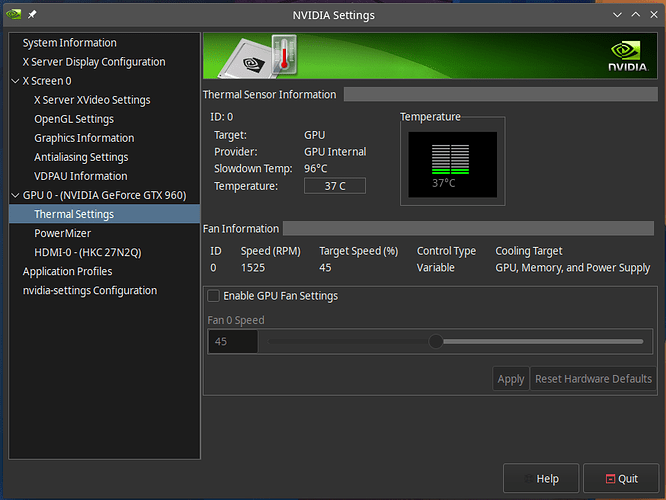 Well, enable it and put it back to zero … apply and then disable it again. Is that helping? 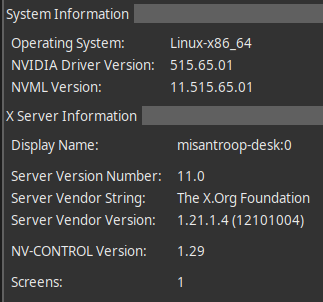 Nope, enabled I can go 45 and higher and it responds as expected. Anything below 45 has no effect, it remains at the same RPM.

Did you use at some point the Green With Envy app and then the conf was overwritten? Also the settings in your home directory contain some funky lines?
My ~/.nvidia-settings-rc is like this:

The rest is not relevant tho … and seems all is identical. What Kernel are you on, what branch?

First time hearing about Green With Envy, never installed it. The install is also fairly fresh, about 2 months old.
nvidia-settings-rc are identical to yours.
Kernel is 5.15.60-1.
I appreciate the help.

Tried both just now, no difference. Is there a reliable way to downgrade Nvidia drivers?

Excuse the late reply. Tried the suggestion to no effect. Seems that on the hardware level the change was already made as in the newest front-end, the minimum fan rate is 45%.

I am not sure if this is the source of your problem, but I had to disable the compositor after the last update to be able to have my PC usable on two separate machines (both on Manjaro). First I had to kill it (ps aux | grep compiz and kill PID). Then, I am using KDE, so System Settings > Display and Monitor > Compositor > Uncheck the box for Enable at startup to prevent it from spawning again with xorg. Please try and see if it helps.

It is mostly for desktop effects such as transparency, etc. AFAIK. In my case, my computer became usable and responsive again, so it was a solution rather than trouble.