I have succesfully installed Canon LBP2900B printer on Manjaro KDE using AUR (en) - captdriver-git. I wanted to know if there is any interface for advanced printing options, like the one in Windows. More precisely, I want to change to increase toner density, disable toner save, change brightness and contrast settings. Is there any I can do it?

Normally this sort of thing would be handled through the CUPS interface. Click on the link below and it should open the page in your browser.

I cannot find a toner density option which is available in Windows.

in the cups web interface (localhost:631)

That is under the “General” tab - there are also “Banner” and “rules” (or something, in german it’s “Richtlinien”)

I don’t see these options in the ‘General’ tab. No toner density option in Banners and Policies as well. What I see is this: 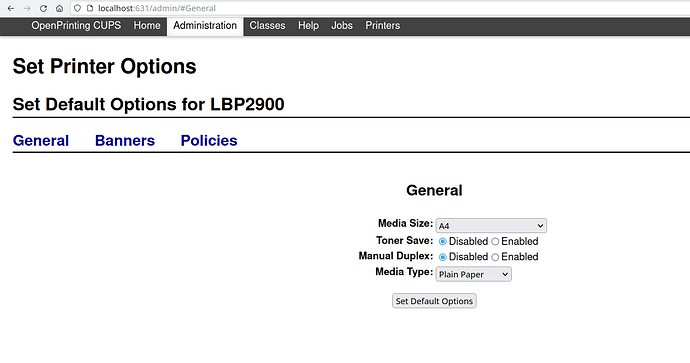 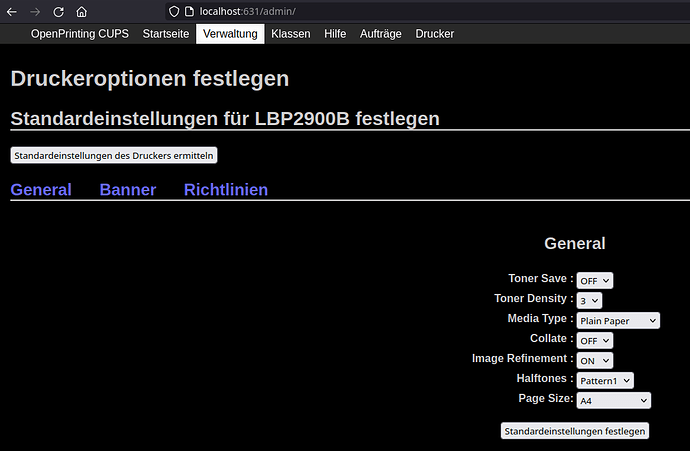 … on second thought:
no, actually not a different model - the LBP2900B is just the name I gave it during set up.
which I did like this:

The whole process is documented here:

This post assumes that you have installed the prerequisites - I can’t believe that your printer even actually works without having installed
capt-src (from AUR)
and then set it up.

You need that for this Canon printer to work.

I refer to this:

which links to this:

where it is described.

ahh, I see
You used this instead:

There is also an open source CAPT driver in early alpha stage not described here, available as captdriver-gitAUR.

… don’t - it’s early alpha, as they say
and I don’t know whether it even works or how to set it up/use it.

beware, those packages from arch-archive are not updated for latest patches since python2 package is no longer maintained

I’m on Arch - not on Manjaro, but that does not matter here in this case.
And I answered here just as I had installed this printer driver a few minutes earlier.

I’m sure that there is no python2 dependency involved with this driver package!

That came from something else on your system, likely another AUR package.
I’m also pretty sure that it is safe to remove it - along with what caused it be be requested.

There are threads here dealing with this python2 “issue”.

I’m sorry. I was so sure - but I didn’t look.
python2 indeed was pulled in during the build
but I didn’t notice, because there was no problem
and I opted to remove the build dependencies as well - so I had it, bu do not have it anymore.

I just saw it when I looked in the yay cache.

I said it already - I’m on Arch. No problem for me with that python2.