A few issues with updating and software

To try to solve this issue, I uninstalled GIMP and the files and programs it added to Manjaro through pamac. I was careful to check to see if any were needed by other programs or XFCE. If I found that they were optional for other programs or only needed by GIMP, then I uninstalled them. I restarted my Pi and then went about reinstalling GIMP through pamac. Pamac asked me for my system password to start the install. After I did that, pamac asked me to choose an optional dependency. (There is only one, and it is to allow GIMP to print. I didn’t select it and clicked the choose button.) Pamac then informed me that additional programs would be installed that would help GIMP run properly. I clicked the apply button and pamac started the download and installation process. It stopped early in the process with a popup saying “Failed to commit transaction: failed to retrieve some files”. Here is the full output of what it did when it tried to load and install GIMP. 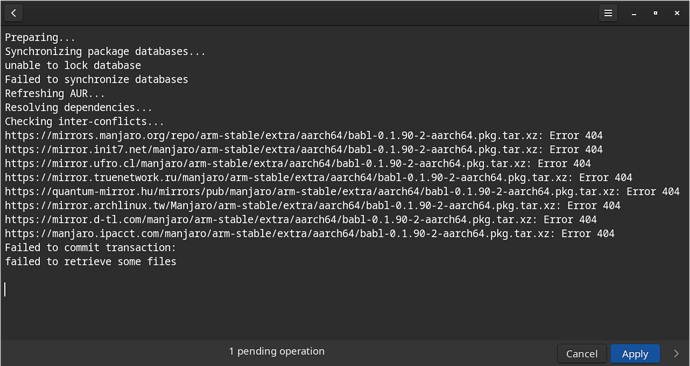 matray gets it’s information directly from the forum RSS feed, while Pamac only checks for updates every 4 hours (I believe) and relies on the mirrors status if they have synced in the update.

The last few times I did receive updates, I started seeing this error message. Once when it started the update and again when it finished. (A total of 2 of these popped up each time with the same info in them.) 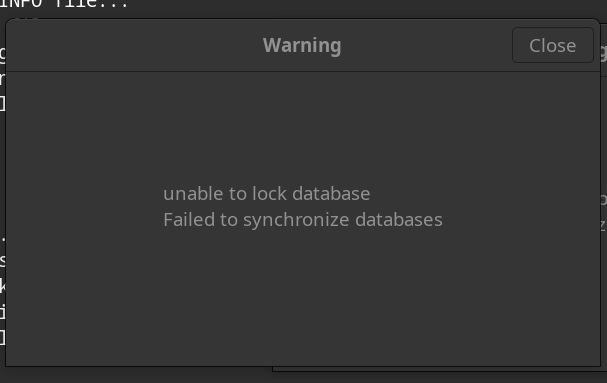 The first appearance of this message was on the 11th of July. Why am I getting this. Is this causing issue 1 above?

Not sure what is causing this issue for you, I have not seen it for months on my end. But it is not directly the cause of your first issue. To fix this one, do sudo rm /var/lib/pacman/db.lck and try updating via Pamac again.

I would like to reinstall GIMP. Will solving issues 1 and 2 solve the issue with GIMP?

After you solve issue 2, you should be able to instal GIMP again. I have no idea why it was doing fullscreen stuff for you. The 404 errors in Pamac was because of outdated databases, so you can go to Pamac → Hamburger Menu → Refresh Databases and apply the update. It should then install/update correctly after that.

I’ve also been seeing that issue in pamac but have not had any issue updating.Also pamac in the terminal works fine as well.I looked in /var/lib/pacman/ and have no db.lck to delete.Refreshing databases or changing mirrors to worldwide also does not stop it from showing up.As i stated it doesn’t seem to stop pamac from updating or installing anything it just shows the error.

I did everything you told me to do and now have my copy of Manjaro fully working again. First I went to Pamac → Hamburger Menu → Preferences → Refresh Mirrors . Then I went to apply your first fix ( sudo rm /var/lib/pacman/db.lck ) in terminal and it told me It couldn’t find the file and ended the process. I exited out of the terminal. I then went and did your last fix ( Pamac → Hamburger Menu → Refresh Databases and apply the update ). When I did that it refreshed the databases and applied the update in one go.

I went and reinstalled GIMP back on my Pi from Pamac. It fully installed without any popup warning boxes. I ran GIMP and it still had the issue I described before. I went poking around the menu and found the solution. It’s Edit → Preferences → Interface → Window Management → Reset Saved Window Positions to Default Values. When I did that, it returned GIMP to being butted up against the XFCE panel and the maximize button works as expected.

Thank you for all your help.