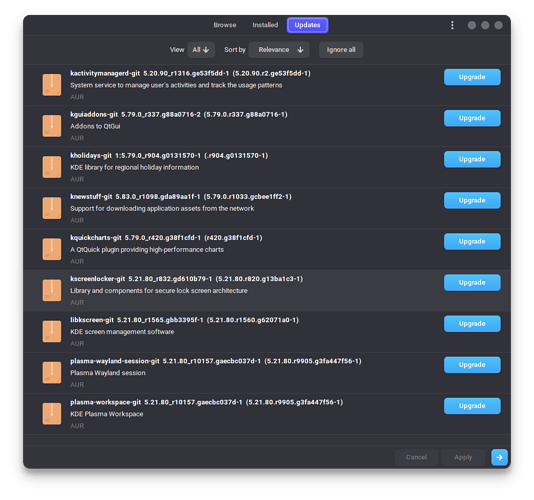 I got these updates for some KDE specific apps and it just wont complete. I have tried updating each one of them by their self but none of them works. They are all from the AUR which feels strange. I have also googled the error code and was not able to fix it on my own. It has been like this for the last two weeks. Please help. Below is the error message i receive each time

CMake Error at CMakeLists.txt:53 (find_package):
Could not find a configuration file for package “KF5DBusAddons” that is
compatible with requested version “5.82”.

The following configuration files were considered but not accepted:

Do you specifically require the -git packages? If not replace them with the normal packages as per this thread:

Yesterday I updated my system to the latest relaese sudo pacman -Syu After the update, I tried to open up my krunner but it did not work. I tried opening up my plasma start menu but that did not work either. At first I thought maybe all my shortcuts got messed up or my super key doesnt work. I actually use KDE as a tiling window manager - super key and arrow keys to move windows around instead of dragging and dropping windows. After I used this shortcut to move my terminal to the upper left, I…

No i don’t that’s why i was confused as to why the git packages were installed from thee AUR from the start. I was a little bit scared of replacing them though because i wouldn’t be able to install them again. But if you say that it should work i believe you, thanks.

Now i also se though that a lot of other programs are also git versions. Do you think i am accidentally om some sort of testing version of KDE