grub-vanilla needs to be rebuilt after latest unstable updates. grub-probe fails to run because of a missing libzfs.so.2. As a result linux59 kernel update does not complete.

I installed the grub package then reinstalled linux59 so I could boot my system.

pythonqt is still in our repos when it was dropped from arch repos and requires python 3.8.

They’re most likely leftover, untracked files and safe to remove. Check with:

pythonqt is still in our repos

Nothing requires it, it’s now removed.

Updated along with mintstick.

As I remember, I’ve checked them with pacman -Qo /usr/lib/python3.8 and they do belong to gufw, but I didn’t take my computer with me today, so I cannot have a double check currently.

I’ve noticed that some of these packages (like xorg-server and its dependencies) and some packages fom the previous testing update (like plasma-desktop and all its components) have made it through to the stable branch.

Was this intentional ?
For the moment I’ve postponed this (stable) update.
Should I proceed with this update or not?

Should I proceed with this update or not?

If you’re unsure wait for an announcement in the appropriate forum section #announcements:stable-updates

I thought I had got away with it, but I was wrong:

Better way to resolve this use „Pamac“ from Manjaro. It’s there own package manager (AUR - Helper)

I’m temporarily using gnome-tweaks-git from AUR to avoid this issue.

Normally I do use pamac, but it doesn’t work in conjunction with systemd-nspawn which is why I use pikaur at times because that does work with it. I won’t bore you with the reasons why that is so, they are too complicated to explain.

Just found out that I have lost all printing ability now as well (hp printer - and yes I have reinstalled hplip). All connections to localhost are dead so forget cups I can’t even get the page up, and the Manjaro print settings just says ‘not connected’ all the time (obviously for the same reason) so that is no use either. I will let you know if I get a solution.
Edit. lo is up and accepting pings but nothing else.

What the hell switched the service off I haven’t at clue.

…maybe you missed the message about the service changes?

pikaur was reinstated by a rebuild of the package.
I had already done that of course and it didn’t work, but next time I rebuilt it did work, so if you are affected by this rebuild it twice, don’t ask me why you have to do that though.

I always remove orphans. What’s the point of having them on your system if you’re sure you mark the ones you need as “explicitly installed”?

Btw, I think this still needs some cleanup @nightmare-2021: 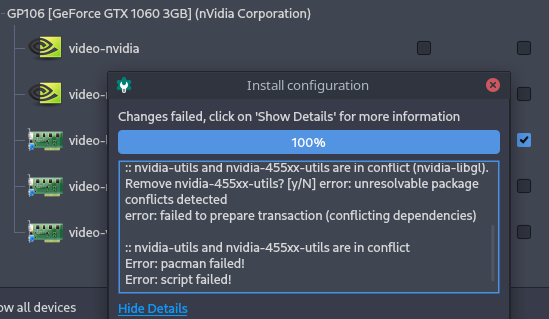 after today update I’m having a minor problem that’s when my session is locked return only a black screen. In a tty I can see that everything is normal, but I need to kill my session to able to see the login screen again (or startx a new session). I’m using lightdm. It also happens if I use xflock4, it will go direct to the black screen.
Did new tests without a second monitor, it will go to login, but to try to login with my user will result in a black screen.
Locking with xscreensaver and login will not result in a blackscreen but xscreensaver is too ugly to be used.

As the problem was with light-locker and there’s only a few other options to be used with lightdm, changed to sddm to work around the problem.