I’m currently on Linux Mint and want to switch to manjaro xfce. I’m unable to find a tool to create a bootable usb for manjaro. I have MBR partitioned disk and hence can only boot in legacy although it has support for uefi😏. Problem is that I updated from win 7 to win10 hence the disk is Ms dos style partitioned. Can’t convert to gpt without formatting which I wont since it has so much data.

Also does anyone have any idea if my laptop’s battery life would improve on xfce compared to LM cinnamon?

Laptop’s specs:
AMD APU A8 7410 with Radeon R5 graphics and 4 GB Ram.
1 TB HDD
Any help would be appreciated

I tried it using etcher but it says the iso is not bootable as it’s missing partition table. I downloaded Manjaro xfce minimal iso torrent from official website.

Should I install kde or xfce one based upon my specs. I had kde few months back but it caused freezes and many bugs. I want a bit stable system that just works 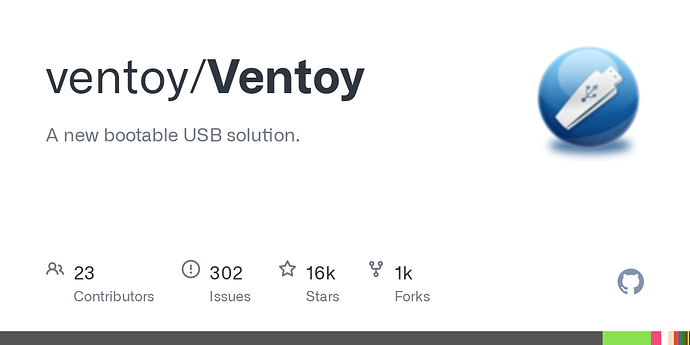 A new bootable USB solution. Contribute to ventoy/Ventoy development by creating an account on GitHub.

download ventoy ( the .tar.gz one)
switch to folder where you have extracted ventoy:

Install ventoy to the USB disk:
sudo sh Ventoy2Disk.sh -i /dev/sdY (where Y is the location of your USB drive)

Can it handle legacy boot like rufus does in windows

AFAIK, yes. Give it a try. The method I listed above doesn’t even install anything on your system.

I’ve been using Fedora Media Writer for many years and it’s always worked very well for any iso I’ve downloaded.Since your using Mint you can try it out as it’s a Flatpak.As far as only having MBR I have an older computer and had no issue installing Manjaro.I don’t know about XFCE but KDE works very well and is fast on a computer from 2007.