I have managed to install the new kernel however after a few reboots the system is still using the old one, and there is no option to remove the old one either (doing so I thought might “trigger” the system to use the new one, but that is moot as I cannot uninstall the old one anyway).

How does one change to the newer kernel? 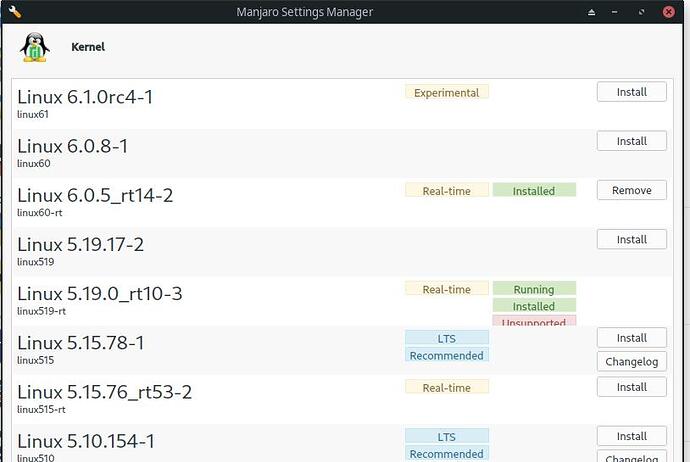 why do you have installed ‘rt’ kernels? do you need them for specific purpose?

if you install newer kernel, you should automatically boot with it… if not, you can tap esc during boot, and the grub menu should appear, and in there in advanced options you select the kernel you want, but dont select the fallback one … or you can do this:
sudo nano /etc/default/grub
and edit this line:
GRUB_TIMEOUT_STYLE=hidden
to look like this:
GRUB_TIMEOUT_STYLE=menu
then press ctrl+x to save the file
run this command:
sudo update-grub
reboot and the grub menu will appear automatically

To complement: GRUB/Tips and tricks - ArchWiki

there is no option to remove the old one either

That’s for preventing you from removing the one you are currently running. Switch to the other kernel first.

I see you are testing kernels. Its a good idea to have two installed in case of a bad upgrade or bugs. Imho a LTS kernel works best as a backup, say 5.15.

yes I need the RT fro audio work. I was pressing shift at boot…did not think of ESC will try that.

- the issue was actually CHANGING to the other one haha!

EDIT: Nope ESC did not work either!

When trying the sudo update-grub I get this “/etc/default/grub: line 6: grub: command not found”

The text as per the instruction now reads menu instead of hidden, but yeah, I get that error message above.

When trying the sudo edit-grub I get this “/etc/default/grub: line 6: grub: command not found”

You likely input the wrong command.

Nope the command was entered correctly - the Line 6 it refers to was already in the grub file!

A good command is sudo nano /etc/default/grub without “line 6”. Edit line 6 then Ctrl+x and then y to save…

When is the error message “/etc/default/grub: line 6: grub: command not found” displayed, when you boot up?

What is line 6 of /etc/default/grub ?

Recent kernels should not need RT anymore, only threadirqs kernel command line required. Of course your actual needs might be tougher that you actually need a RT kernel, just trying to give a suggestion. Ardour and Guitarix run responsively with ~2ms latency on my system.

Sorry, just realized in my post above there was a typo: the command I MEANT was sudo update-grub not edit-grub (I changed it)

So this is what I entered and the result:
sudo update-grub
/etc/default/grub: line 6: grub: command not found

What is line 6 of /etc/default/grub ?

for reference mine is just empty quotes

FWIW, this is the complete readout:

it looks like /etc/default/grub has got mixed up some output messages from the terminal.

Could you have pressed the middle mouse button and pasted output from the terminal in there?

Do you have a backup for that file before editing?

Generating grub configuration file … and the lines after GRUB_DISABLE_OS_PROBER=false don’t like like they belong in a grub config file.

Yeah they did seem a bit incongruous but it was all a default Manjaro Install…this is the first time I’ve even looked at the grub, let alone edited it!!

Perhaps this is solved now?

this would be o.k.
… with nothing else on the same line - just this:
GRUB_CMDLINE_LINUX="cpufreq.default_governor=performance threadirqs"

In fact:
all these parameters should go to:
GRUB_CMDLINE_LINUX_DEFAULT=

Thank you, I will give that a try…

EDIT: Nope that doesn’t work either…Unless it is not the ESC key to press?? If it is, then none of the solutions offered enable me to choose the Kernel.