Also the flatpak version doesn’t have this issue

I get this conflict:

And that’s actually an understatement, because hwids is (directly or indirectly) required by 1400 packages, removing it would break kwin, lightdm, linux510, plasma-desktop, systemd and much more, so it’s not like I could just uninstall or fix one or a few affected packages.

Should I just reply “no”? Would the update still go through normally? But then it would prompt the same thing next time, right?

There is a known issue with Asus Laptops (on multiple distros) where the built-in keyboard is unresponsive in initramfs when cold booting - such that if you have an encrypted root you cannot type in your password.

The solution on Arch based distros was to add i8042 to the MODULES section & move up keyboard keymap in the HOOKS section of mkinitcpio.conf.

After this update, the solution has stopped working & the keyboard is again unresponsive - but only if cold booting. Rebooting is perfectly fine.

Anyone else with an Asus Laptop have a similar experience, or is it just me?

@philm is the latest packager of linux-driver-management.
Is this still needed on your system?

Try to remove if not.
The move to hwdata is inevitable: that package needs fixing or removal.

[Testing Update] 2022-01-17 - OpenSearch, Kernels, KDE, Cinnamon, Pipewire, Mesa - #51 by michaldybczak
qbittorrent-qt5 is compiled and installed. Works and looks fine. I guess this is the best solution for now

I just upgraded and my Telegram app has no issues at all, running on AMD APU (amdgpu). try changing system theme…

With Qt applications progressively migrating to Qt6, i find myself using a mix of Qt5 applications (QuiteRSS, BackInTime) and Qt6 applications (QBittorrent). Currently, i can’t find a way to apply GTK2 style to everything (qt6gtk2 and qt6ct don’t seem backwards compatible). Have anyone resolved this?

Just spotted those. It seems QBittorrent is just being too ahead… 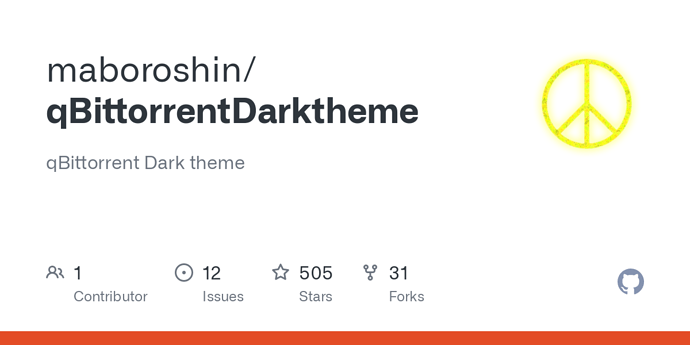 qBittorrent Dark theme. Contribute to maboroshin/qBittorrentDarktheme development by creating an account on GitHub.

The same thing happened to me, for the moment until they tell me how to proceed I use this:
go to preferences
use custom iu theme > set downloaded theme

A couple of updates ago there were notifications at the end to add these lines to your /etc/environment file.

You also need to comment out the line #QT_QPA_PLATFORMTHEME=qt5ct

This should fix it - or at least it did on mine.

Still having the same issue with systemd-homed using a dedicated disk / RAID1 so I moved my two machines to using an encrypted home image file instead for now until the issue I had already with previous update is resolved. The issue in question:
FS#73208 - Systemd-homed fails with systemd-250

In addition to that one, no issues for me with the update thus far.

X - Yes i am currently experiencing an issue due to the update. (Please post about it)

My webcam does not work with the current 5.X kernels. Under Opensuse Thumbleweed with 5.16.1 the webcam works.

Alot of comments on that issue state, that re-creating the home with current systemd seems to work (raid isn’t even mentioned) - did you try that?

All good. I have two new orphans. pth and lib32-soundtouch are these safe to remove?

Edit: Whatever, removed them - no fires.

Regarding the Telegram issue

This leads to read message ticks, stickers, etc being pixelized. The issue on Telegram Desktop official repo states that it’s not solvable on Qt 6 at the moment: [search for QT6 fractional scaling in new versions results in pixilated images on linux]

Solution: install the official binary package from Telegram, for example, from AUR. That is built against Qt 5, I guess.
pamac build telegram-desktop-bin
(Don’t worry, it will pick your user profile and settings, no manual actions were required for me)

qBittrorrent switched to using qt6, so install qt6ct and set the theme there.

I have issues with some KDE keyboard shortcuts:

How can I debug this issue? I skimmed “journalctl -b” and saw nothing special (except that I have EXT4 errors that I’m fixing now).

kio-gdrive not found after upgrade the system

When accessing your folder from dolphin, it loads without displaying anything.

and reboot (or reload kwin using the commands in the link).

I’d heard about kernel 5.16 has some better gaming perfomance. So, I’ve installed and switched my kernel from 5.14 to 5.16 and get issue with my xbox 360 gamepad. It was connected and detected in the system settings(I use KDE edition), plus in Steam the same, BUT there wasn’t any input events from my gamepad. And when I tried to see an error with xboxdrv(I have xboxdrv installed, but don’t use it of most time. Gamepad works natively) by the line:

Just moved back to the 5.14 and all works fine as it was.

Some bugs about plasma
next page →