Last update working perfectly with kernel 5.4 and 5.10 (with nvidia 340 driver, installed using the terminal as explained in the forum and not through AUR). Until now I have not had any freeze as I used to have in the past

I like the elementary Xfce dark icons and would like to keep them. I can’t imagine that this shouldn’t be possible anymore. It would be nice if someone could help me with this issue.

Finally I voted the poll: No issue, everything went smoothly

The first thing that I’ve done after the updates has been to install libxfce4ui-nocsd (I had already installed Gtk3-classic from AUR - now again available in the official repo); I also had to set DialogsUseHeader to false in
Settings Editor > xsettings > Gtk, which is easily doable by executing xfconf-query -c xsettings -p /Gtk/DialogsUseHeader -s false in a Terminal window.

I didn’t faced issues with lost settings in Whisker Menu; I didn’t lost the battery icon(s) - my icon theme has the “level” icons for battery (battery-level-*-symbolic.svg).

Some minor annoyance was the fact that some other icons, like eg the “Show Desktop” have changed the name scheme: previously was named show-desktop.svg and was available in the icon theme folder; now is take from /usr/share/hicolor/32x32/apps/ and is named org.xfce.panel.showdesktop.svg; so I copied the previous icon from icon theme folder, as ~/.icons/hicolor/32x32/apps/org.xfce.panel.showdesktop.svg and is like before

And as I’ve said above, the battery icon in the panel is big/huge.

Obviously I also run PACDIFF and the only pacnew was the one of dnscrypt-proxy, which for me has only introduced new phrases in the config file.

Xfce 4.16 seems to acting better than before: is blatantly faster/smooth; the panels are improved (before, when set to auto-hide, they had the tendency to not hide/unhide properly).

Now, the panels, when set to autohide, they have a fade out animation, which, by default, imho, is too slow.
Is possible speed it up by adding the following code to ~/.config/gtk-3.0/gtk.css:

Or by further lowering these values.

KDE with USB Tethering looses connection and can crash TaskBar

Same here. Here is a screenshot of what it looks like. The first Konsole icon is a Widget added to the panel, and the the other icons are running programs. The size of the Widget icon size is what the running program icons looked like before. Also, like you said I tried changing the Icon size in the Task Manager Settings but it does nothing. 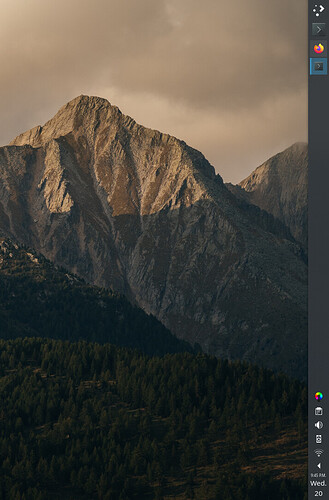 All right, I’ve increased the panel width to be a bit bigger and the task manager icons have taken a bigger size. It bothers me that the Icon size setting does not work tough.

No.
Are you looking in the correct location?

Yes, of course. Documents folder (in my case in Czech “Dokumenty” and files in it just missing. I’ve even tried program “R-Linux” to recovery them, if they are deleted, but folder of files is just gone and program didn’t find anything from that folder.

Have you a nvidia GPU ? If it’s the case, you have the bug of the driver from 450 to 460 (you can ssh in your freeze system and check journalctl -b 0 to confirm that).

update went well then after few hours my laptop started to just freeze. i thought its something to do with extended screen so i disconnected it and still happened. no issues with suspend or sleep it just random.

If you know the filename of a document search for it. the folder might be moved or renamed, since nothing is recoverable? you do have a backup solution for your documents I hope.

qtwebkit-bin tries to build qt4 from source, do I need to keep qtwebkit-bin installed or can I remove it ?

Thank you! Incorporated into solution wiki for this update.

(I just upgraded to 5.10 and 460 and that seems to work too, added below your solution)

For the future, please read this

Look for ‘-d’ in pacman man page. You can use -Rdd in extreme cases like these

See new edit to the wiki solutions of this update.

Well, that was first thing that I’ve tried. There was some appimage apps and some backups. I use different folder for documents. But, it looks like, that whole folder with it content magically disappeared :(. Maybe it is not related with update, but seems like it. So I’m just trying it, if somebody has same problem. Seems not.

Real mystery over there…