I am happy to announce another Stable Update. Mostly we have updates for Juhraya 18.1.2 release. 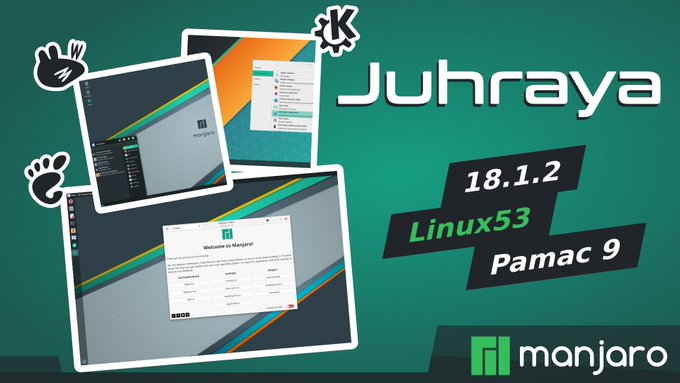 This update holds the following changes:

Give us the usual feedback and let us know what you think about this update.

A detail list of package changes can be found here.

Since Manjaro sometimes updates packages before Arch does it might come in rare cases that Firefox wants to create a new profile. You can avoid that by starting Firefox once within a terminal the following way (see also here):

xfce4-power-manager does not open / upower fails

linux51 is EOL and has been removed from the repositories. It will be replaced by a metapackage which will from now on keep you on a maintained kernel.

If you want to keep the old kernel and modules then include them in your pacman.conf's IgnorePkg.

Pamac-Qt is not compatible to 9.0 API of Pamac

It's not quite obvious but I think I could find the source. For now it's much more important to adopt the logic of app to upcoming 9.0 release

the pkgver 19.10.1 ship with an hook to remove the capability from gnome-shell. A message is present during install but essentially you need to reboot the system to show correctly the icons in the desktop. More info here

Due to a regression in Plasma 5.17 (still not fixed) unplugging the secondary monitor doesn't trigger any reaction and Plasma still outputs the screen to the non-existing screen. The temporary workaround is to refresh monitor state manually with xrandr in the terminal, so, for example, we can run: xrandr -q to trigger the recognition that the secondary monitor is not there. The bug is already submitted, alas not much is happening with it at the moment:

Firefox update creates a new profile, so it is a good idea to export the bookmarks to HTML before.
All other updates went fine.

An inconvenience: Firefox created a new profile, says this version is older than the one previously running. Fortunately, I managed to sync most of the settings from another PC which I haven't yet updated (and probably won't before this is fixed).

And another thing: should I downgrade fontconfig ?

This is not an inconvenience but a big problem. Firefox never needed a new profile to run. I had 70.0 installed and running perfectly. But now the "new" version 70.0-1 needs a new profile? Why?

I have four different profiles and I do not want to reconfigure everything again.

For Firefox, to keep the old profile, run from terminal:
firefox --allow-downgrade

Same issue with Firefox on my side.

Opening Firefox shows the dialog to create a new profile or quit because of old version. Still Firefox 70.0.0 in the repos (uninstalling/reinstalling Firefox).

Does this have any influence on later updates? Does it just allow Firefox to continue with the old profile or will there be a problem with it later on?

I did this and I haven't had any problem. Still I don't understand why this happens if there's no real downgrade!

No problems at all.

Edited as the explanation was incomplete and misleading a bit:
The --allow-downgrade refers to the use an older profile created with a higher version of Firefox on a new Firefox installed to a version bellow, not the reverse.

If you don't have other devices running Firefox and you can't sync settings and bookmarks, then I can see it being a bit more than an inconvenience. A major pain in the butt, to be precise.

Luckily, in my case, it took about 15-20 minutes to restore everything. That's why I classified it as an inconvenience.

Modifier only shortcut for krunner stops working with Plasma 5.17. See https://bugs.kde.org/show_bug.cgi?id=413070 how to fix it.

So the problem is that firefox doesn't manage the upgrade of the profiles automatically?

the number after "-" is just a package versioning (internal to manjaro/arch) it does not have any relation with the software versioning.

the firefox xx.yy-0 are usually package built by manjaro for fast update on all branches. and later replaced/upgraded by the usual xx.yy-1 package coming from arch.