I was having issues with my touchpad* (it wasn’t being detected), so I force shutdown the computer and restarted it again. For some reason, there were some issues, and after rebooting again everything worked, however the dock is now square? I know this isn’t a big issue but I really don’t like how this dock is specifically square when everything else is rounded.

I have attached the themes that I am using below: 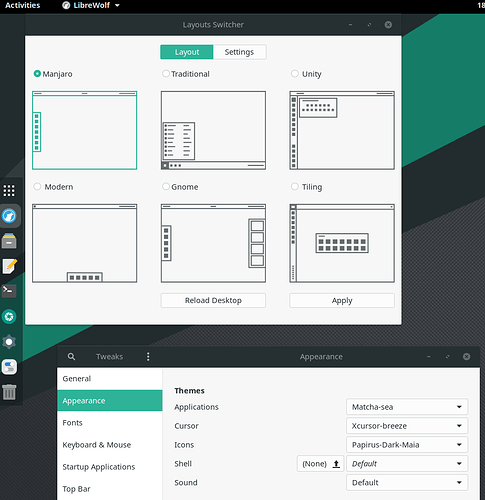 * This happens after using the touchscreen on my two - in - one laptop. Using touchscreen sometimes causes bugs with other input devices and it also just leads to some sort of “entropy” where the computer starts working at a worse and worse quality until you restart it. This is probably because Linux still has a long, long way to go when it comes to touchscreen support.

Dash to dock is not yet entirely ready for gnome 40. It received support only recently, and there are severe graphical glitches with it. This is one of them. It should be sorted in a few weeks. These kind of temporary issues are to be expected with unstable branch every once in a while. Mostly on gnome major updates…

Are you sure this is to do with the testing branch? I think it was caused by this update which is the april 18th “Stable” update. Why would they make updates like this is important extensions like dash to dock don’t work properly?

This is due to the new Matcha Sea theme which is updated for Gnome 40. To go back to the rounded borders, toggle this option to “ON” under the Dash to Dock Settings. 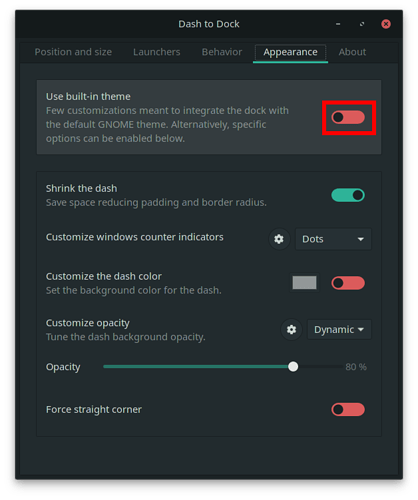 Has anyone had this glitch with the dock on manjaro after updating to gnome 40 ? there are some shadows around the dock. is there any fix-update?

In my opinion, it’s a theme issue.

Try different themes, I’m pretty sure it’s due to your actual theme not fully compliant with Gnome 40 (or it’s intended as new design).

Yep, you’re probably right a couple of themes don’t have this problem, but most of the others have it. Do you know a way to inspect the dock element? Is there a way, like inspect tool of the browser, to do the job for GTK elements like dock or top bar, etc?

Well… A text editor?
As all Linux system, theme are files.

Not in front of my computer right now, you can find the different themes listed on the related folder in /usr/share.

But browsing GTK themes is tedious… I succeeded with modifying themes in KDE and Cinnamon, never tried (or quickly abandoned) in Gnome.

Given a particular theme, what do you want to achieve? Modify shapes, colors, …?

Use this GitHub - ewlsh/dash-to-dock at ewlsh/gnome-40 instead,
Manjaro’s dash-to-dock has so a lot of issues

We’re actually using his fork via PR 1402, see the PKGBUILD.

Ddd, Obviously, you use a text editor!

I mean is there something like Inspect / Cntrl+shift+I on your browser if there is any similar option for Gnome [using some extension or so], in order to inspect a specific element and then change a part of the code that is needed to. Yeah, I’m new in gnome-shell-extensions development and stuff like this, I don’t know what are the available tools you can have.
After all, it isn’t very productive searching around the whole .css file for a possible section that might need some changes.

There is Builder, the Gnome development tool.

But never tried, don’t know what to expect.

Yes, seen that glitch. Because of problems I had with the dock configuration, for the time being, I turned off the dash-to-dock and am using Plank. Its very configurable for themes, color, opacity, gradients, geometry and behavior settings. Small screenshot attached. The only thing is it won’t work with Wayland.

I checked it, you are right, it’s the same fork, but I find the issues are about the configuration files in
schemes folder and stylesheet.css file . After I deleted them, everything was normal. I wish you could add the CSS code of the appearance into the Gnome-shell theme, so that it will not overwrite the third party Theme’s dash-to-dock style!

We use an override for the theme in the manjaro-gnome-extension-settings package. Feel free to open an issue if you have ideas for improvement.