My previous wallpaper caused the topic to be closed (the manjaro perfume). No problem, I can understand the decision.

Here is a new wallpaper which, I hope, will not suffer the same fate because I spent some time drawing this one.

The story behind the drawing:
In the jungle of Linux distributions, you can find a real gem: manjaro

It wasn't so much the wallpaper, that was nice. It was the comments that came with it

This is even better than your last though. Seriously impressed, did you use Blender?

will not suffer the same fate

This is a totally different story and has a complete different message, nothing to do with the previous one in that regard. This one is GREAT, the other one was not.

See if you can fix the open chest shadow on the ground, and it will look even better in that perspective. The shadow always follows the edges of the object from the light source, will project the negative path of the light beam intersecting the object.

did you use Blender?

This is all 2D illustration.

All the illustration is done with Inkscape.
I used Blender just to make a basic template for the chest and the manjaro cube. Thus, I am sure that the perspective, the proportions and the shadows are correctly drawn.
Then i used Krita to convert the png files to jpeg and to make a little adjustment of the brightness of the chest.

Amazing work! Thanks for sharing. 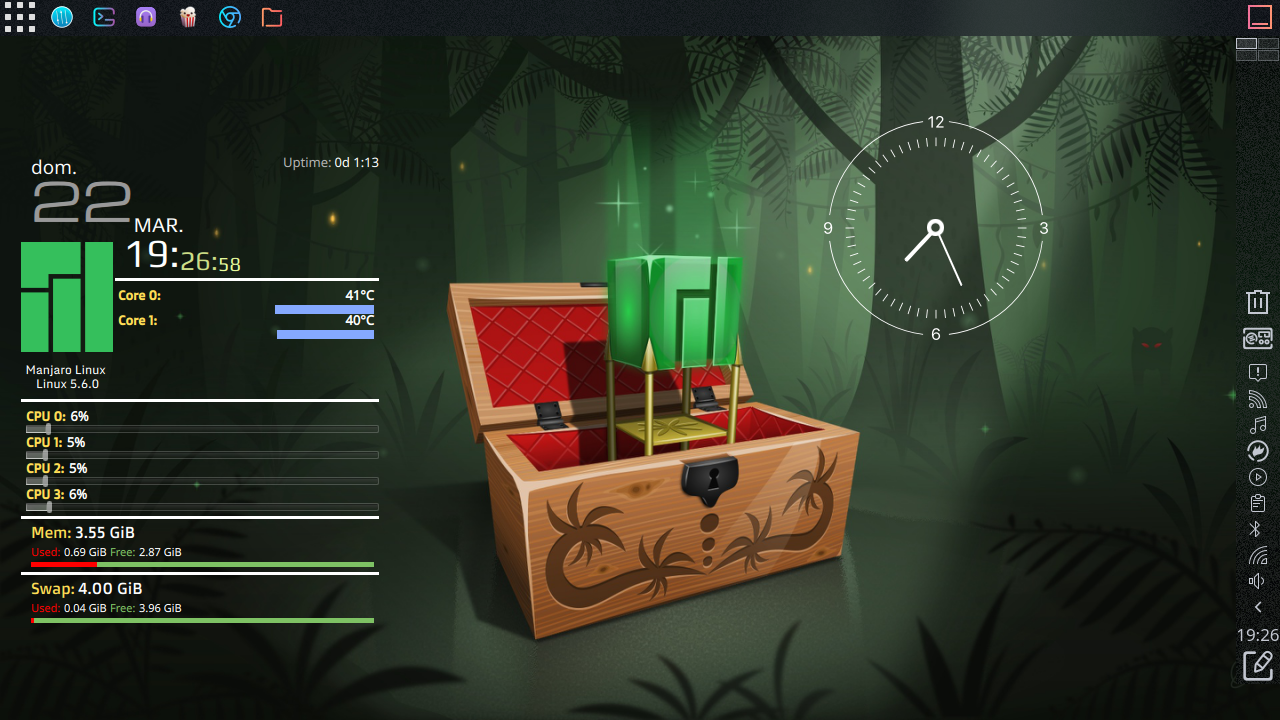 With the wallpaper there it makes the wrong/old logo on the left conky even more uncomfortable.

Thus, I am sure that the perspective, the proportions and the shadows are correctly drawn.

Sorry, i wasn't trying to drag you down, and force you to give that explanation to somebody else... My criticism was a constructive one, but if you don't trust me, at least see what other artists have to say about the issue i mentioned. And the reason i mentioned is because you spend time on something that could have been made without issues.

Get the book of Scott Robertson - How to Render - The Fundamentals of Light, Shadow and Reflectivity
He explains in detail the difference between a local light and Sun light and how to properly illustrate them in 2D.

Example of casting shadow from a local light:

For sure the scene in blender had the correct everything, but the light scenario from your illustration doesn't match it. And here is why: the way the shadows on your objects cast (represented with pink), point to a different light source than the light beam from the atmosphere you illustrated (represented with yellow).

Of course the light scenario from the examples i gave is a bit different than yours. A way to combine the two would have helped visually.

With that said, it will be the last time i will address someone on their creations if i spot an inconsistency.

the left conky even more uncomfortable

It's actually not conky.. but "simple monitor" widget on plasma.. as far as I know the logo used is the"official" logo from the system.. then it's an error there..

Ah I see. It is a problem with the widget then. It shows the same on my desktop too.

We could ask themto update

It don't use a logo image provided by the distribution?
Somewhere in the system? How is the logo in the kinfocenter? (I'm not on my computer right now)

Its hardcoded .. each file is bundled with it .. see here: 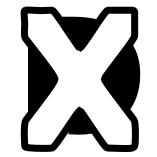 and it seems an issue was opened in 2017

Manjaro logo needs an update to the new logo

The manjaro logo is still the old one. you can find the newer Versions in here: https://github.com/manjaro/artwork-logo Thanks :)

Just change the logo in the widget settings.. and done 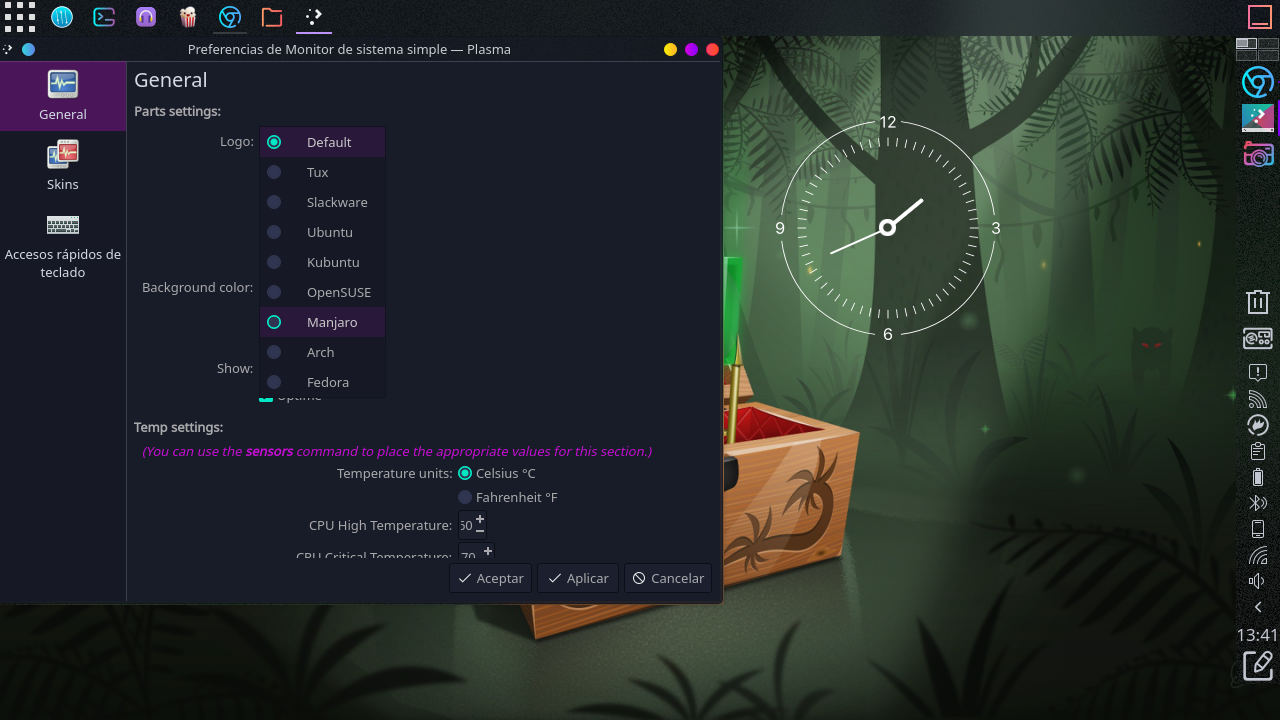 ...except .. as mentioned above, and the whole point of the exchange .. is that it provides the old logo.

With that said, it will be the last time i will address someone on their creations if i spot an inconsistency.

Don't be so susceptible my friend. I answered to antikythera about what programs I used and my working method, not to you.

I am always open to constructive criticism. The shadow of the chest is correctly drawn in relation to the light source used in Blender. But yes, you are right, the god rays are not technically at the right place.
At first, I just wanted to draw the chest. But on second thought, I decided to draw also the jungle environment. And I thought a more horizontal god rays would look more artistic whitout to be shocking because not technically perfect.

So, i have re-uploaded the wallpapers with the necessary corrections.

Sorry if I'm not always very clear, my english is limited.

First thanks for the link to the Plasmoid.

But when you fixed it, how did you do it? On your own local git clone? I installed it from the AUR and just moved some files around myself:

yeah .. I will probably post a proper git fork in a bit ..

You have a special gift, and i can tell you are a hard working person. What you presented so far, shows that. Please keep that flame alive no matter what. Sometimes the real message i want to transmit in writing is misinterpreted as harsh, or maybe is my dry way to explain things.

I decided to draw also the jungle environment.

You captured perfectly well the atmosphere, i love the entire composition, color choice, otherwise i would have not clicked the

, but in the same time i wanted to point you to something that will help you, and i'm sure you will understand it and master it in no time.