The output of your aplay -L is significantly different than mine. But I think that was with the rpi4 kernel.

Nope. The output I posted above was using the linux upstream kernel. I switched to linux-rc and the output was the same. 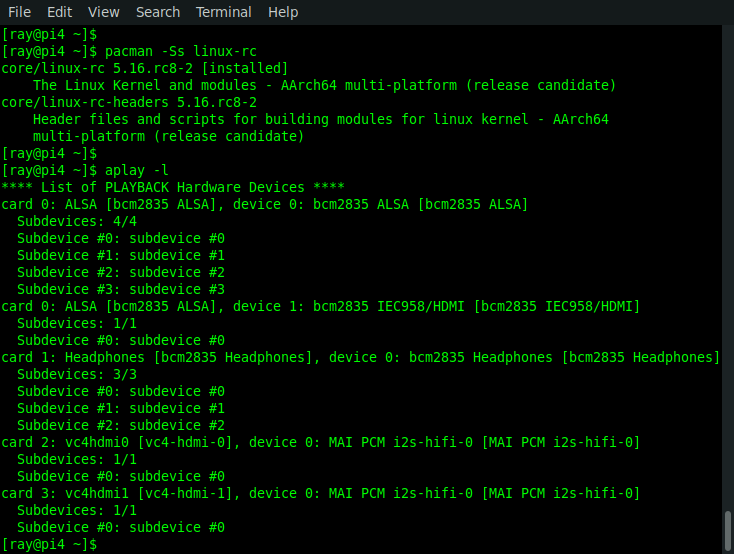 Well, still no change in my configuration.

So let me backup and try to get upstream working like you have it.
What do I need to do to recreate your setup?

And would you mind posting your config.txt and cmdline.txt?

I too have pipewire installed… but I do have this:
$ pacman -Ss plasma-pa

Bah, my download failed. Starting over. This will take a while, my internet connection is lousy.

Now to figure out why this is not working for me, starting with adding uefi firmware and installing grub.

This pretty much confirms, this is all related to uefi failing to keep up with the changes. It can not boot a rpi kernel and it can not boot with new device trees. I should give up on grub and my multi-booting ideas. And probably commit to the upstream kernel while I am at it.

@Darksky Changes were made in 5.16 for v3d. Have you tried building the v3d driver with the upstream kernel with those changes?

Seems wayland really prefers v3d. It will work with llvmpipe but it is too slow for video playback (dropped frames + high cpu). But it does work pretty well for just regular 2D desktop work.

Nope. Never tried with the v3d kernel. I will try today if I have time. Today is grocery day so do not have much time.

I tried to mess with it on 5.15 the other day and it did not work. I just looked at the linux 5.16 config and V3D is not exposed so will have to find what enabled exposes it before I can enable it. Is cma 384 enough for your 4k monitor.

I think this is what needs to be applied to get v3d available in the kernel config.

That is what I am looking for in the linux config but it is not there right now. Something has to be enabled for it to show up.

I think this will get it to show up in make config.