Problems with Firefox theme after update to ver. 96

My firefox button was perfect until I update today to the version 96, now the buttons of windows are square instead of following the rounded buttons from WhiteSur theme for gnome. When I try to use the default theme for firefox the WhiteSur theme works, but If I try to use any other theme suggested by firefox itself, the buttons get squared. When I try to open “Help” it follows the system window button, but not in the browser itself: 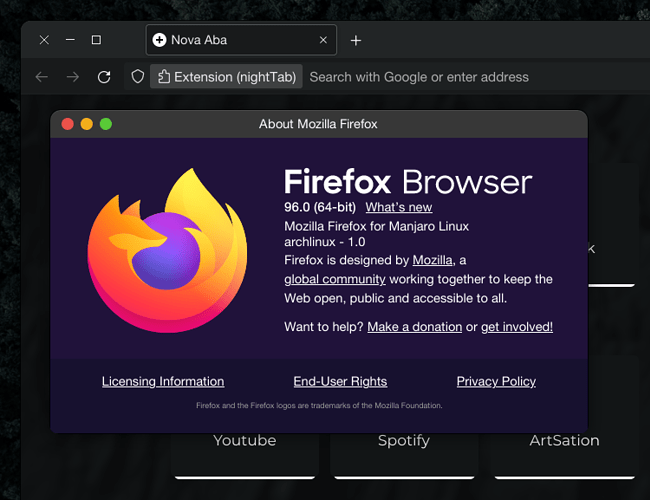 That’s actually a fix rather than a problem because earlier while using firefox’s built-in themes the window-controls became invisible.

Here’s a mention about it in omgubuntu firefox 96 announcement article.

So, is there anyway to have the problem back?

Am I missing something? If you want FF to match GTK theming, then you should use the “System Theme” setting … for any other kind of ‘custom’ look … then you would need a ‘custom theme’ (which is what I do)
If you want to do the custom thing easily then see here: https://color.firefox.com/

Basically, I just want to use firefox theme with the window button of GTK, nothing more than it. It was working this way since the day I installed manjaro…

So, there was a solution here in reddit to bring back the default GTK button while using themes in firefox. Here’s the final code for userChrome.css

Just a note - in order for userChrome.css to be functional, in about:config you must set

where is the userChrome.css file?