It looks like my NTFS disk is failing. Not surprised as it’s an old Samsung EVO 840 drive.

When I logged into my PC this morning, I noticed a wall of text (where two lines are still repeating) regarding ntfs-3g: 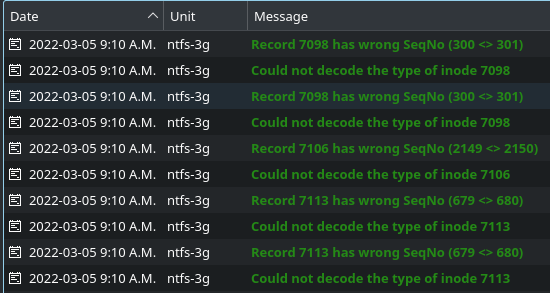 Wanting the journal spam to stop, I thought I’d first try umount the drive, but it was “busy”…

Looked a bit in ntfs-3g and found there was a ntfsfix command related to it (needed to remount the drive), and it basically tells be the “Volume is corrupt”…

… and the output is the same (sans the last line) if I remove the “-n” option.

So how to I safely stop the ntfs-3g from doing what it’s doing and stop the journal spam?

In preparation I’ve edited /etc/fstab so that the drive no longer mounts at boot.

okay, looks like gnome disk was able to interrupt the ntfs-3g journal spam.

I think I was confusing kde’s partitionmanager when i suggested I could use gnome disks to dump/recreate the partition table… but the moment I removed one (of five) partitions off the disk, the ntfs-3g spam stopped filling up the journal!

The drive/partition dropped from Dolphin, but kde partitionmanager still gets stuck in it’s “scanning” phase, so I think there may be some residuals that will be resolved by a reboot… unless this is still a symptom of the disk being busy?

For now I’m happy that the journal spam has stopped… and hope the reboot is clean.

EDIT: Thankfully the reboot was clean, kde’s partitionmanager loaded successfully (I think earlier the password prompt was hidden/missed), and an additional step (to /etc/fstab) was needed to cleanup the disks references… grub still had the disk listed to optionally boot from; resolved by $ sudo update-grub.