pacman-mirrors was rebuilt to match the Python 3.9 release/update. 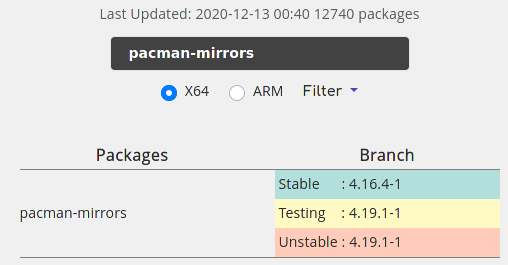 With that rebuild several changes - not previously released - has been made.

The most prominent is probably the ability to supply countries to use by using - almost - any mix of upper/lower case characters and the possibility to use the country code instead of the full country name.

pacman-mirrors still requires you to spell the countries or country codes right but as everything is compared using lower case and country code - you can do - almost - as you like.

If you use duplicates in the country argument - they will be removed.

The experimental async argument is dead - it was no good anyway.

Some fixes and changes has been related to the ARM architecture.

For at complete list of changes please refer to the changelog

The experimental async argument is dead - it was no good anyway.

good subject “Proposal to improve the mirror list to get the faster server.” with archlinux reflector

And this comment by @xyne is spot on and I couldn’t say it better.

The file can be changed in pacman-mirrors.conf

pacman-mirrors is using core.db as measurement - would it make sense to change that?