I am new to manjaro(to linux in general) and tinkering my way through. Recently I tried to update my system and this message:

I ignored it and did the update anyways and i could never boot back i tried to update/delete some packages by booting with usb through chroot but nothing changed. Then I freshly installed manjaro again. Now I try to update my system and the same message pops up. What should i do?

P.S if you need more information please let me know ( and how to get that info ^^) Thanks!

You have to switch the kernel to a supported one, the 5.9 is EOL=end of life for quite some time now, and you probably boot from it and now it fails, because there are no modules for 465 driver series …
From TTY, as your user, run this commands:
sudo mhwd-kernel -i linux510

reboot into it, and then run
sudo mhwd-kernel -r linux59

If required, install again the nvidia driver with:
sudo mhwd -a pci nonfree 0300

after running this I get list of packages that needs an update, after I continue, I get the following message.

as it will delete the current kernel? … what should I try?

Did you boot into kernel 5.10, because the OS should boot into the newest kernel you install. IF it did not do that, you might need to tell GRUB to start kernel 5.10, which might be a bit difficult.

There is a slight work-around to have grub show up at boot (if you like).
First open up a terminal and type in:
sudo nano /etc/default/grub
Provide your password.
Grub should look something like this (note I have grub showing up by default):

From there press ctr+x to exit, terminal will prompt you if you want to save changes, press y for yes, and press enter when it asks you where to save the folder (we are just overwriting).

From there type in terminal

Next time you reboot/turn on computer it will stop for 5 sec in grub. From there select Advanced settings and select kernel 5.10 and press enter.

To hide grub at start-up, just repete these steps and change menu into the word it was.

Hey! Thanks for the reply. I followed the steps and when I restarted there was no kernel 5.10 option, just 5.9 twice

That is way above my knowledge. Can you boot into GUI? IF so then you could look for kernel in the start application. The application should look similar to this 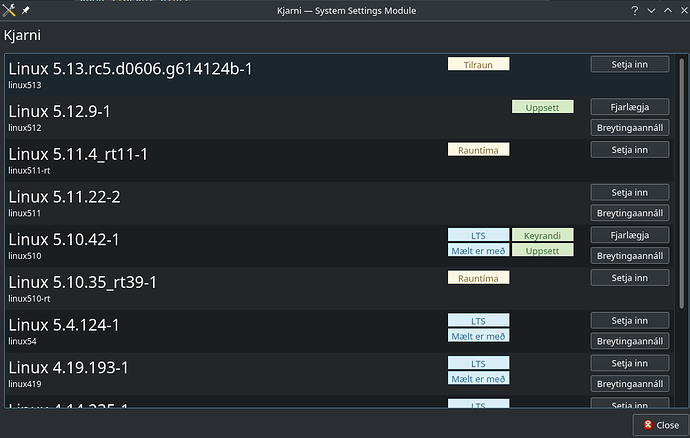 There install kernel 5.10, which is LTS (long term support) and will be supported for the next 5 years.

You can get more info here: Manjaro Kernels - Manjaro