I know all the helpful members who try to diagnose/resolve network issues hang out here. I think I dreamt up a really useful network info command today. This command returns only the essential info and removes all the cruft from the super long hwinfo output.

Try it and give me some feedback.

Please feel free to use it if you like it.

Here are links to other useful scripts/commands that I added later on in this thread that are useful for troubleshooting network issues.

Command to search for recently updated components that can affect networking:

When a new update breaks networking, users are often told to check /var/log/pacman.log to find which package may have caused the breakage. Unfortunately, the list can be very large at times and users may be confused as to what may have actually been responsible. I have written a search string to narrow down the list of important packages that might have been responsible for the network breakage. This reduces the list to manageable size so that the offending package can hopefully be found easily…

Command to install the linux-headers for every installed kernel:

Network Manager's MAC Address Randomization feature can often interfere with wifi connectivity. There is an easy one line command that can automatically create the required file in etc/NetworkManager/conf.d that will disable that feature. Enter the following command in the terminal to automatically generate the required configuration file: echo -e "[device]\nwifi.scan-rand-mac-address=no" | sudo tee /etc/NetworkManager/conf.d/disable-random-mac.conf After creating the new conf file, reboot bo…

@tbg Looks good to me

Thanks. The thing I like the most is it includes the “Driver Activation Cmd” unlike inxi -Fxzc0. When you want to modprobe, sometimes the driver name is different than what is required in the modprobe command. With this output you’re not left guessing what the correct modprobe command is.

I’m also happy to see this command returns no ‘sensitive’ information … unless someone considers a model sensitive.

Try to remember that command, (hope your memories better than mine).

@tbg - that is what aliases are for!

Bookmark this - this could easily become one of the most linked posts in the (near) future!

that is what aliases are for!

Yes indeed. I will be adding this to my ever growing list of aliases shortly. I can never remember my wlan ID, as it’s such an obnoxious string of letters and numbers. Damn them for changing that.

Here’s my output. Notice the extra info for the r8168/9 drivers. You may also notice my WiFi driver and modprobe names are different. Very handy info to have.

Added this to my .bashrc

here is my output:

Too funny. Thanks for the compliment.

This is a neat script. Thanks !

Thanks @SGS for posting your output.

We have you to thank.

Wow, I just expanded your output and read it. Total shocker. This output is actually far more useful than I first realized. The output lists not only the driver modules that are installed and loaded, but also the unused kernel drivers and their modprobe command.

This will make troubleshooting so much easier, as I will no longer have to refer to the Archwiki to find the alternate drivers to use. I had no idea this extra benefit was hidden away inside the hwinfo command. That is just a total bonus. Thanks @SGS for posting your output. That just made my day.

Congrats @tbg , very nice work!
One newbie qustion:
I noticed you “backslashed” : , all but file .
Was that intentional or just forgotten?
I tried it both with(out) and gives the same result, no errors…

That was simply an omission on my part. If it didn’t work as I added different search criteria I would have noticed it. As you say, it does work, so no harm no foul. Good pickup.

I will edit it for consistency.

When a new update breaks networking, users are often told to check /var/log/pacman.log to find which package may have caused the breakage. Unfortunately, the list can be very large at times and users may be confused as to what may have actually been responsible.

I have written a search string to narrow down the list of important packages that might have been responsible for the network breakage. This reduces the list to manageable size so that the offending package can hopefully be found easily.

If anyone can think of further important packages I might have missed from my search terms please pass them along so I can add them to the list.

I used this for the first time today on a support thread and it seemed to work very well. Test it out and see what you think of it. Any suggestions for improvement would be greatly appreciated.

Here is an updated version of my original command with more search parameters that may be preferable to my original version:

i cannot help you much with figuring out, which packages you should look for, but i can suggest improvements.

i have taken (with a small modification) your output and used “fzf” (this package needs to be installed on your system) to display it in an easily searchable and visually pleasing manner.

here is your “raw” data:

and here it is with some visual improvements:

here is the output on my system: 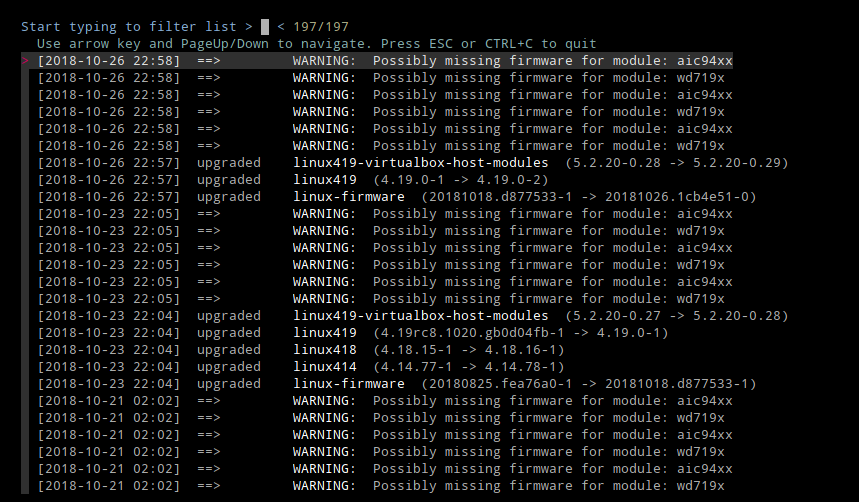 simply modify the first part (before “fzf” or “awk”) in order to experiment with it.

feel free to use my code in any way you want.

Thank you so much. That was very nice of you.

This is my output as it is currently formatted:

I know there are some real pros when it comes to scripting on the forum. My scripting skills are rather pitiful, but I’m trying to improve. I’ve been playing around with trying to fully automate restarting all wifi components via a script. I wanted to accomplish this without having to know the module name and adapter ID in advance. I wanted to be able to have a user run the script without having to manually edit in the missing info. This will hopefully come in handy on wifi troubleshooting threads because most new users barely know the difference between a module and an adapter. Hopefully a script will make things easier for troubleshooting.

Please give me some feedback.

Those who suffer from a flaky wifi connection can use the above script and a desktop launcher to automatically refresh your network connection (rather than rebooting). To have the above script launch in the background (not in a visible terminal window) you must first install a small terminal multiplexer called “tmux”. As the script must be launched as root a small pkexec confirmation window will still pop up asking for the sudo password. There are other methods of refreshing your wifi connection that don’t require root permission, but they are often not as effective as this method. This will allow you to automatically restart your wifi connection from a handy desktop launcher.

Restart your WiFi connection with a Desktop Launcher

Create a file named “wifi-restart.desktop” with a text editor to start your WiFi connection.

Note: You must edit the “Exec” line in the desktop file to reflect the correct path to the “wifi-restart.sh” script in your system.

The desktop file should have the following contents:

Be sure to make the desktop file you created executable.

The desktop file can be placed in your start menu, taskbar, or on your desktop to conveniently restart your wifi connection.