The system is working fine on my machine, but I would like to know how to install the latest drivers for my video card (even if it is proprietary)

In this window, I noticed that there are 2 checkboxes (source open / installed)
In my case, only “video-linux” has the two boxes selected, the other two options “video-modesetting” and “video-table” have only the first box selected

All the listed drivers are open source, there are no proprietary Intel drivers. You already have the latest driver installed (video-linux) included in the kernel. If you run inxi -G you should see the driver listed as i915, that’s the Intel kernel module.

Thanks for the answer.
I typed in the command and the information I received was as follows

In case only “video-linux” is installed right?
I also noticed that “network-r8168” is not masked in the installed box. 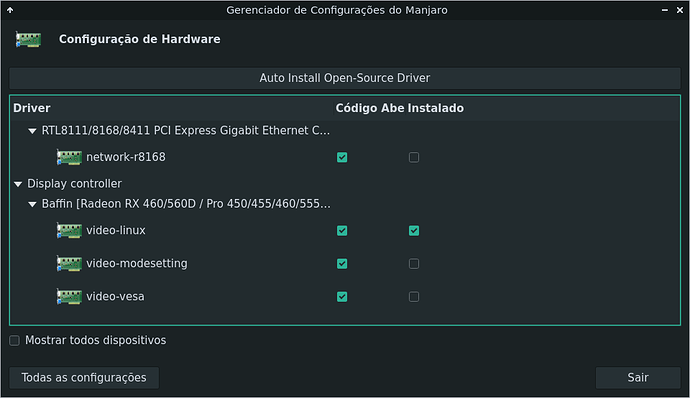 You had Intel graphics in the first screenshot, now you have AMD? Either way, the story is the same.

Forgive me, the first image I sent wrong, now that I noticed… the correct image is the second I sent

I also noticed that “network-r8168” is not masked in the installed box.

By default it uses the open source 8169 driver for the network card, but you can install the proprietary 8168 driver from Realtek if you want, but if you have no network issue don’t install it.

But yeah your information are weird… you show Intel then AMD, that’s weird. What are you doing?