Meta key does not work, because I made more panels

So I tried things out for my first time with KDE and Manjaro. I switched the panel, then i could not switch it back to the original.

does it work in a new user?

I made a new user, but when I try to switch users, it freezes

Did you try adding a Default panel instead of a New Panel?

Yes, I did, I have the default panel on the bottom too, it opens with alt+F1 but not with meta

Try to add the Meta key as a custom shortcut here. 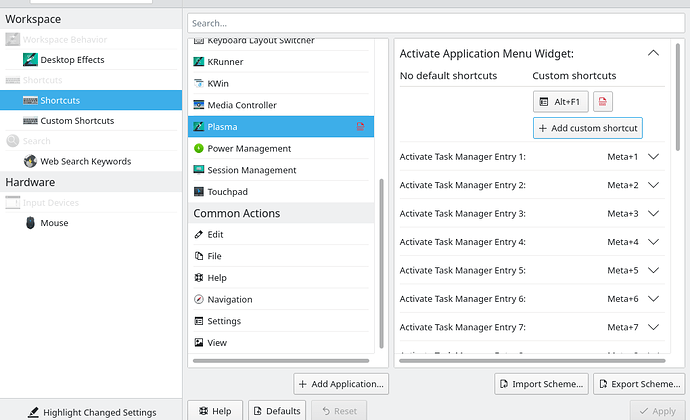 You can’t do that, meta key is a modifier, there’s no way to add ‘Meta’ as a shortcut. Alt+F1 should be replacing meta as a shortcut, but it doesn’t.

That’s weird, but out of the box Meta key does work as a key to start application launcher.

Yes it works, but as I said, I messed up the panels, and now I can’t set the meta key back to my panel

Yes, this happens. If I create a TEST user, then again (vanilla KDE) the panel WILL open with Meta key, but after that’s lost it’s hard to work out how to get it back.

In the end, I settled for Meta+Z for that menu

Don’t forget, just typing on desktop works with krunner. If you’re using floating (traditional) windows, then you can press Meta_D to go desktop and type, or you can press Alt_Space to pull up krunner on top.

There is a tutorial in the forum somewhere - I guess time to go search it out again - about bringing back Meta-menu, but it failed quickly for me (maybe the first time I do anything in Latte dock, it won’t open again).

Meta pulls down the menu again.

You have to set ksuperkey to autostart on login though.

Hi. This is kind of related and something I wanted to share. I’m running pure Arch Linux with KDE Plasma 5.21.5 but I imagine will be the same for Manjaro KDE users given Arch is its basis. I wanted to make the (windows) meta key keypress alone (default is ctrl+F10) display the KDE Plasma “Present All Windows” view, which is kind of the nearest Plasma equivalent to default meta key behavior in Gnome which displays the Gnome “Activities Overview”. ie both DE’s show all open windows via these two functions arranged as kind of a interactive patchwork across the entire screen so the user can select a running application. Anyway, I got Plasma to display “Present All Windows” by pressing the meta key alone by issuing the following in the terminal to modify the kwinrc file:

Then issue the following in terminal to reconfigure and restart kwin for the above mod:
qdbus org.kde.KWin /KWin reconfigure

This shifts the shortcut windows key “meta” from the default “Application Launcher” to instead open the Plasma “Present All Windows” view. This is something I find myself using all the time so is very useful to have meta key attached to that function.

I still need ksuperkey to get mine to work. The toughest part sometimes is just to assign Alt+F1 shortcut to the menu, sometimes it just won’t stick.

That’s new - I think I’ll give this another go.