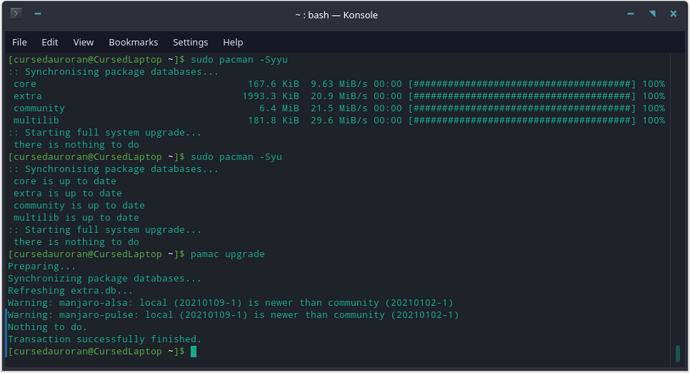 I dont know what is causing this issue, I have rebuilt the keyring etc (since before this I was facing a PGP error)

Don’t worry. It’s nothing to worry about.

but what is going on then?

2 packages you have installed, has been downgraded in the community repo to a previous version.

If you don’t have any issues with the packages on your system, you can ignore those warnings.
If you do have issues with the new packages, you should do sudo pacman -Syuu to downgrade to the repository version.

What could be the cause is that a package has been detected as faulty - removed from the repo and replaced with the previous version - or it could be that pamac has rewritten your mirror list and coincidentally have switched the mirror to another - also - from primary mirror perspective - up-to-date repo.

This will trigger the message described - but as also mentioned - it is nothing to worry about.

Basically it means that the version in the repo is older than the version on your system - nothing to worry about.

thanks for all the replies everyone! helped me out a lot!