I’m a total newbie to anything Linux here. Installed Manjaro on a Pi 400 a month or so back. Hadn’t used it since then (not due to lack of interest but to moving to another country). Fired it up again today, got prompted about a bunch of updates through the regular desktop interface updater, did them, got prompted that a restart would be required, did that, and then this happened:

(Edit: apparently new users aren’t allowed to upload, embed or link to externally hosted images, but if you go to pasteboard dot co (not com) and add JMGQxXQ.jpg after the trailing slash, you should see the screenshot)

Safe boot (by keeping left shift pressed during boot) doesn’t work and neither does hitting [ESC] (i had seriously read that somewhere). So basically the thing becomes totally unresponsive.

If there is any chance of restoring the system, I would be most appreciative to any suggestions. Many thanks in advance! 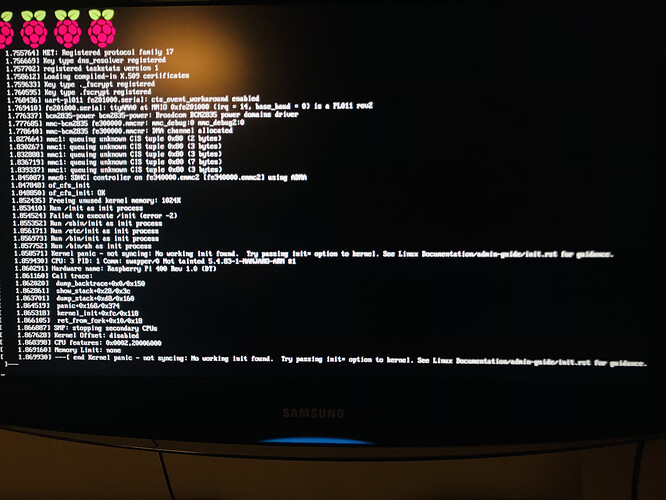 Too much overclocking can have dire consequences when under a heavy load like decompressing a new kernel to install.

Many thanks for your thoughts. I’m not trying to nor have I in the past ever booted to an external drive of any kind. Just the integrated SD card. I also haven’t done any overclocking. It’s literally an out-of-the box Pi 400 with Manjaro installed. No fancy tweaks or anything. Not even that many additional apps for that matter, apart from a VNC server ¯_(ツ)_/¯