Cinnamon’s Nemo and XFCE’s Thunar both seem to use the very powerful utility bulky for batch renaming of files, while Dolphin ships with an integrated and very limited batch renaming function.

EDIT: I did look at krename, and while it is powerful I just like bulky’s simple and uncluttered interface better.

Not built into Dolphin itself, but… 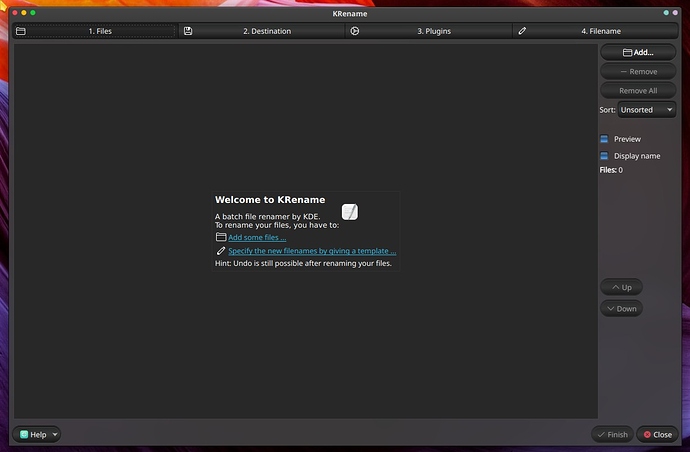 FYI, that’s only Cinnamon’s, and is based on Thunar’s integrated bulk renamer.

I don’t think you can. But that shouldn’t stop you from using it separately.

Thanks for clarifying. It seems better to just install thunar or nemo then, as a go-to when I need the batch renaming

EDIT: After installing thunar, in Dolphin I can Open with... bulk rename (Thunar’s integrated). Not perfect, but works for me.

I tried installing bulky, but it didn’t work well. Selecting mutltiple files in dolphin and Open with... bulky, only the first of the selected files were opened, defeating the purpose so to speak.

Negative. Bulky is a GTK application, while Dolphin and the whole of Plasma are based upon Qt.

GTK and Qt don’t work well together. And unfortunately, the GTK developers like it that way.

GTK and Qt don’t work well together. And unfortunately, the GTK developers like it that way.

Guess that’s why bulky as a standalone didn’t work well, then.

There are a couple of utilities which I tested. Krename is okay, GPRename is also very good, and also I have CoreRenamer.

KRenamer is okay, but I prefer GPRenamer as it’s easy to remove parts of names and rename as you go. For example, in the screnshot - once you start doing stuff, it automatically shows matches/results and you can hit the Rename button and continue. 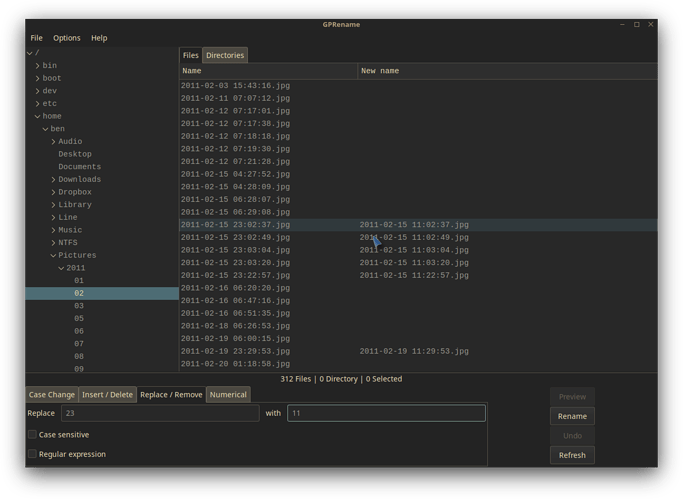 And what is wrong with selecting the files you want to rename and simply Rename them?

But what do i know about complicated things ?

Because last week I downloaded a playlist of BBC programmes with about 60 mp3 files and it would have taken way too long to clean up and remove gibberish from each one… and every file began with a different Title (different text, different length) and episode number which I didn’t want to change.

For audio files there are special tools to do batch editing on them like kid3, either renaming or changing internal tags it’s much easier.

Sure, but there are different kinds of files which I sometimes need to rename - and using regex on a whole folder is the way to go.

For most Audio files, I just use Picard to tag them and organize/move them to my /media/Music directory. Guayadeque is also pretty good for that, then sure, if something won’t get tagged I can use Kid3 or Easytag - Ex Falso is also not bad.