Restating the title, I have an issue in KDE where, intermittently, windows will horizontally maximize when they are moved from one screen to another.

Sorry, if this is already being discussed somewhere… I was only able to find threads about HOW to horizontally maximize windows, including search engine results.

Let me describe the my setup (maybe some details are relevant):

It is most noticeable, and only really an issue, when moving windows from either of the two verticals to the ultrawide.

Anyways, this phenomena most frequently occurs with dolphin, konsole, and sublime text 3, but that’s probably because they are the applications I most frequently move across screens.

I’ve looked extensively through the “Workspace Behavior” and “Window Management” groups in System Settings, but cannot find anything of use.

KDE Plasma has the Maximize and Tiling helper ON by default. Is related to Settings > Workspace Behavior > Screen Edges. Is quite possible that when you hit a corner or and edge, with a moving window, due the way the Monitors are arranged on the Screen space, one of those helpers kick in, so disable them and see if that helps: 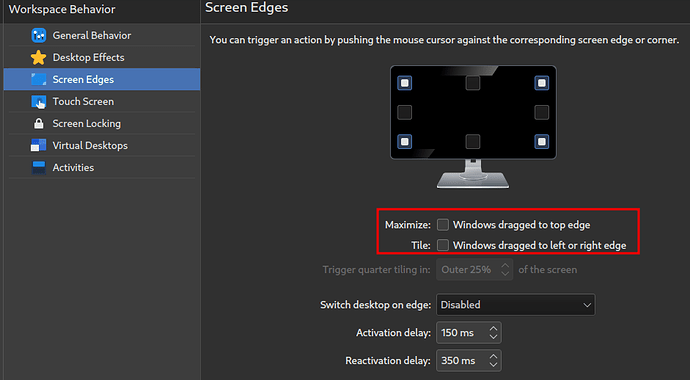 I significantly upped the Activation and Reactivation delay to 950 and 1000 ms each, but the issue still persists… Do these delays only apply to the “Switch desktop on edge” option? I’d like to keep Maximize and Tile enabled, as I do use them frequently, but I will try turning them off and report back.

You can still maximize windows different way and also you can make use of kwin-bismuth to tile windows and not have things in the way of your workflow.

It has happened again, even with Maximize and Tile disabled.

Settings when it occurred: 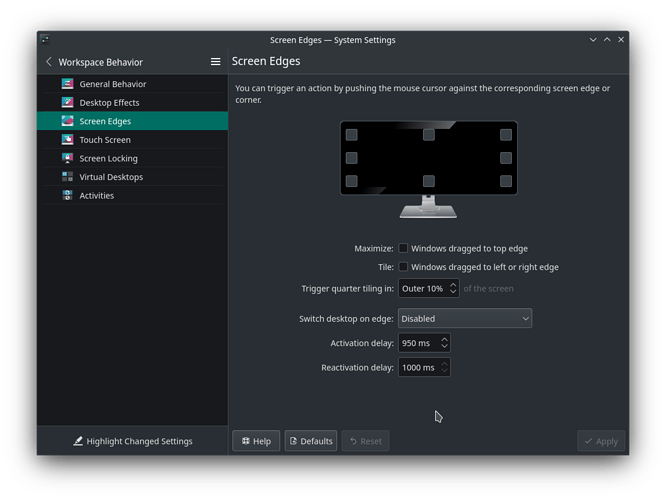 Is this only happening with Qt-based applications, but not GTK-based ones?

(That it occurs with Sublime Text makes me think that’s not the case.)

I know it has happened with both Sublime Text and Steam; I’m pretty sure neither use Qt.