Is this kind of file indexing option particular to KDE?

Just out of curiosity, not a technical/support question: is the kind of file indexing exemplified on the image below a KDE only feature? I ask that because I remember not being able to index secondary drives in Ubuntu gnome when I used it, however on KDE I can just index folders on every mounted drive and then install a widget like “Ditto Menu” or Ulauncher to just do a quick search on them, which is very handy. 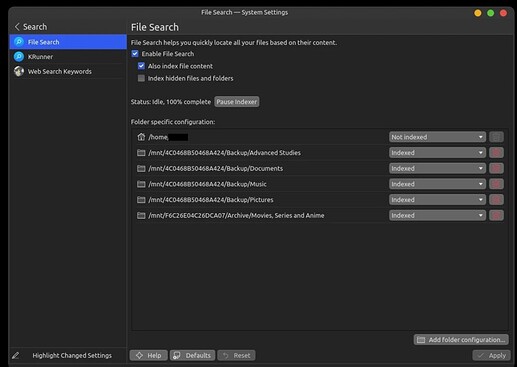 (I don’t know if that’s a dumb question. Haven’t seen something similar to it anywhere online).

Its database can be found under,

Could I install it in a gnome DE by installing Dolphin for example? Googling about it I’ve read about performance issues, but honestly I’ve had none up until now. Granted most of my files are pdf’s, but still, there are a lot of them.

Why would you need it on Gnome when it has tracker ?

Indexing multiple drives. I couldn’t do it on Gnome/was too slow to search. But then again that was probably me doing something wrong by that time.

It’s Possible, But Prepare to DO some Work.

Actually, Dolphin Takes Control Of the Desktop in KDE, so your desktop Might Break

It Broke Mine on XFCE

So i Had to reinstall Manjaro

I thought about trying to install Dolphin on Gnome at some point, but gave up and just moved to KDE. I’m mostly happy with it for now, so that’s ok, only had this curiosity. I’ve checked my baloo file size and it’s not that insanely large in comparison to the size of the folders I’m indexing, so I guess that’s probably why I didn’t have any performance issues whatsoever (for now at least).