Is it possible to run Manjaro entirely from RAM (not live CD/USB) like Porteus?

Hello
I have 16G of RAM and I spend most of my day in Thunderbird and Firefox, so I’ve been wanting to experimenting to run Linux entirely from RAM (not live CD).
I tried Porteus which is really what I need but the package manager is a nightmare.
Also eared of “copy2ram” ou “toram” kernel parameter… does Manjaro support this?
Also read about RamRoot package but not yet tried…
What do you advise?

I suppose you can do that - but you will have to remember that while you can install new packages - you cannot save anything - so you are starting from scratch on every boot.

You can peek into the System Rescue CD [1] (based on Arch) and they have some functionality to do what you require and some scripts to create your own overlay - they call it modules [2] - and the usual warnings that the overlay only works with the ISO it was created for.

Porteus with “copy2ram” parameter and “changes” parameter saves every updated/new file on poweroff or reboot. Also, we can add any extra programs like firefox or thunderbird on “modules” dir which are loaded to RAM while booting, so if a new version of those programs is available we just have to overwrite them in “modules” dir.

Thanks for the System Rescue CD tip, I’ll look into it

What do you advise?

For my use case (KDE and a ton of applications open all the time), a >64G machine would be feasible, but boot and shutdown times would be long as everything has to be copied from storage to RAM and vice versa respectively…

If you install a minimal XFCE system I’m sure you can get your system install down to 16G easily and 8G with a lot of work, so on a 16G machine I wouldn’t recommend this with Manjaro and you should stay with Porteus…

I understand what you mean, but in my case I just need to run Firefox and Thunderbird, and little else…

Check this Porteus 5.0rc2 running XFCE with Firefox with 3 tabs open, all entirely from RAM, in a Vbox with just 4GB of RAM… it’s using just about 700MB of RAM (and every config file changes will be saved to HDD on poweroff or reboot) 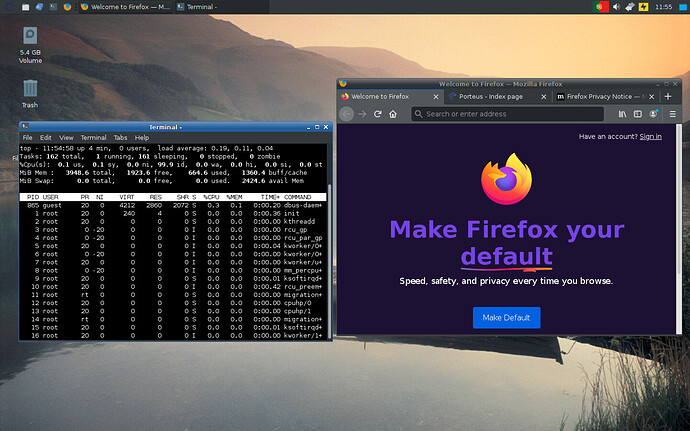 Porteus with “copy2ram” parameter and “changes” parameter saves every updated/new file on poweroff or reboot.

But I actually agree with @Fabby. I’d better recommend using GOpreload. Since You’re just going to use firefox, and maybe just a few programs, gopreload will take all the necessary files to your ram every boot, it’ll have to be configured just the first time, after that it’ll just take a few seconds to take those necessary files to ram every boot. So instead of booting the entire os to ram, you’d just take programs like firefox to ram, similar to as you mentioned on #2.

If you really want a portable version of Manjaro - why not create an USB installation?

Yes I know that. Porteus is based in Slackware and uses AnotherUnionFS
What I’m trying to achieve is something as close as possible to Porteus, but with Arch/Manjaro packages.

I think he didnt want a portable installation, a usb install would be slower. He wanted a boot-to-ram type of install. He wanted performance, not portability.

That is indeed what I’m looking for, by running all in RAM I’ll get a huge speed boost, and at the same time I reduce disk read/writes.

Portability is not mandatory, although Porteus can be both portable and run all in RAM, since it can be installed in a USB and then booted to RAM.

As you know, porteus is very lightweight, so even booting the entire os all at once to ram doesn’t make much of a difference, but there are downsides of booting to ram, like GRUB doesn’t quite go simple with this and such, so porteus does the copying to ram after the base has been booted, then it just copies the rest to ram. Now, manjaro isn’t that light unlike porteus, it isn’t 400mb distro. So booting the entire os, (at least 10gigs, 18 if not minimal) wouldn’t be such a great choice. Now you have already said that you just use firefox and such, so just taking firefox to ram would be enough, taking the entire mutigig os to ram won’t suffice. I have already told you about gopreload, because there aren’t much great copy2ram programs available and only gopreload is relevant and great. I have already answered your question, just try it. I have it installed, and I had to learn and configure it once and I’ve been enjoying it since

…only gopreload is relevant and great.

I’ll have a go at gopreload (no pun intended)

Looking into it.
Many thanks