I can only boot Manjaro Plasma 22.04 from emmc when I insert microSD card

I have installed Manjaro arm Plasma 22.04 twice on my Pinebook Pro, and both times I end up having the same problem. The system can’t boot because it can’t find the root partition. On the other hand, when I boot by inserting the microSD, the system detects the root partition of the emmc and boots without any problem from emmc, not from microSD.

Why is this and, above all, how can I solve it?

Sounds like you have broken uboot and incorrect boot file in emmc.

Please take backup of your files from emmc.

This will be the clean way to getting manjaro back on emmc.

Thank you very much for your reply.

I have done what you propose before. In fact, I have flashed 2 times the new OS on the emmc, and I have been very careful to avoid errors. It’s not a problem with the uboot, at least not a problem derived from having broken the uboot.

What’s more. I have found that sometimes the system boots correctly from the emmc without inserting the microSD. It is absolutely random. This makes me think that there is something wrong with the software, and I am very much looking forward to the release of an update.

This makes me think that there is something wrong with the software,

The only way to find this is from bootlogs.

If you have a uart console then please connect to the laptop and share the bootlogs.

I don’t have a uart console. I don’t even know what it is. Sorry, I’m not a computer scientist, and my profession has nothing to do with it.

Thank you very much, you have been very kind.

That seems a nasty problem. If I understand correctly, you are flashing the emmc from de microsSD right? Have you tried JumpDrive? This is a little program that you boot from your microSD and it exposes the emmc to a computer that you plug to your Pinephone. Then you can dd an OS onto the emmc.

This is how I have been installing OSs on my Pinephone and it has been working. Maybe you could try it out.

Again, thank you very much for your response.

My problem is with a Pinebook Pro, not a Pinephone. I have looked at the website of the software you have indicated and I don’t see that it can also be used with the laptop.

I confirm that I have flashed 2 times the emmc from the microSD, being very careful to choose mmcblk2 from the Manjaro installer.

I don’t have a uart console. I don’t even know what it is. Sorry, I’m not a computer scientist, and my profession has nothing to do with it.

I understand but without knowing what is happening on the background it is nearly impossible to know how to fix it.

Updated version may or may not solve the unique issue you’re facing.

As no one else have reported this issue.

Lets break down the steps your following with detailed explanation and sharing each command you pass on the device with me on this forum then we can see if there is anything going wrong in here from flashing point of view.

I hope that will help us find the root cause of the problem.

Boot from sdcard and share the output of the following commands

As I have explained before, when I start by inserting the sdcard the Pinebook boots … from the emmc. At the moment I don’t have the tools to physically open the laptop and disable the emmc, as I’m far from home, so I’m sending you the outputs of the commands I have obtained working from the emmc:

Oh, one other thing.

While I was writing all this, the Pinebook froze completely, and didn’t respond to any input. I had to force a reboot by pressing the start/shutdown key for several seconds. It’s not the first time this has happened since I installed 22.04, although it’s not usual.

Sometimes (also randomly), when I shut down the laptop, a virtual console appears asking me for root permission, but it doesn’t accept any input. I have found that by typing Alt - F3 and then Alt - F1 the laptop continues with its shutdown sequence.

Thanks in advance for your help and interest.

This morning I gathered my courage and reinstalled Manjaro Plasma ARM 22.04 again on the emmc. It was a shame to lose the nice configuration I had achieved, but the goal was worth it. However, this time I did it differently: I didn’t install the system on the sdcard first and then reinstalled it on the emmc. This time, the installation was direct on the emmc, thanks to an emmc-USB device I have at home. Of course, I had to remove the emmc from the motherboard, but I’m used to that.

The result, finally, has been the same: sometimes the system doesn’t boot if I don’t insert the old sdcard, and sometimes it does.

I’m starting to think that maybe I should re-download the .img file with the system, to rule out that the first download I did wasn’t corrupted.

I have installed on a microSD again this same distro, from another PC, using the manjaro-arm-installer application. This has allowed me to install a live version of Manjaro ARM Plasma, different from the one I had already downloaded a few days ago. However, the problem with the boot on the Pinebook Pro continues.

I have come to suspect that the problem is not in the uboot package installed on the eMMC nor on the microSD, but in the SPI flash. For some reason, the PBP starts up and tries to find a system device, without finding it (or it does, it’s random). I have erased the SPI flash card, following the Pine64 forum. I haven’t managed to fix it.

I think it is more likely that the system device is detected once the PBP reaches a certain temperature. For example, when I have managed to boot the OS and spend a few minutes working with it, when I reboot the PBP there is no problem and the system boots normally.

When booting the system, among the messages that appear on the screen there is sometimes one indicating that it has not detected any card with the set voltage of -110V. When this happens, the system usually does not start up.

One more question … Is it normal that there is 30.50 MiB of unallocated space in the eMMC at the beginning? Exactly the same thing happens on the microSD … 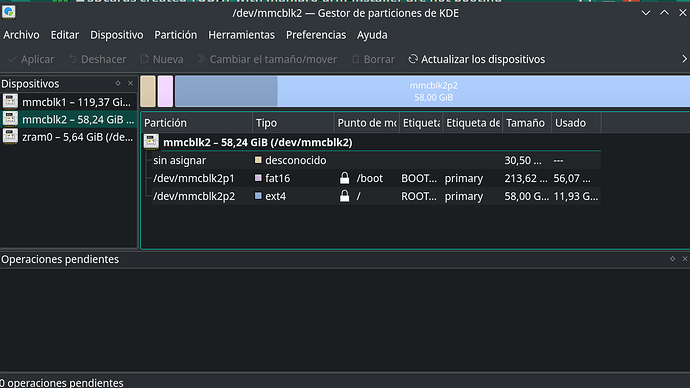 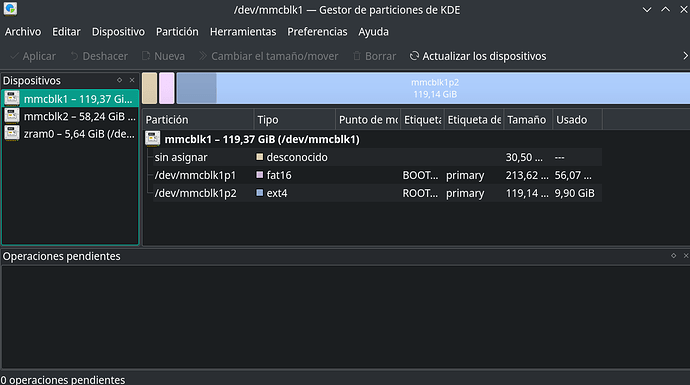 Is it normal that there is 30.50 MiB of unallocated space in the eMMC at the beginning?

Yes, that’s where the u-boot is flashed, it does not have a partition, so that’s why it’s seen as “unallocated”.

Well, as I already commented a few days ago that it could happen, since I have updated the OS to the latest stable version the system boots on the first try. So, the problem had its origin in the software.

Anyway, not everything is perfect. The system boots the first time, but it doesn’t detect the microSD that I have permanently inserted. So it always boots from the eMMC. It’s a lesser evil, anyway. Perhaps a future software update will correct this.

Thank you very much.

The system will always boot in this order: SPI → eMMC → SD. That’s how the BOOTROM in the rk3399 is hardcoded and we cannot change this.

We have made changes in uboot though, so even if eMMC is detected first, it will try booting from SD card first. So if you have nothing on SPI, Manjaro on eMMC and Manjaro on SD, it will boot from SD, unless you do a reboot. Then it random (for unknown reasons). So if you want to boot from SD card, shut down the Pinebook, wait a couple of seconds with it turned off and then power it back on, while the SD card with a bootable system installed.

Thank you very much. For your quick answer and also for all your great job.