How to enable bootsplash with systemd-boot?

Hi,
I used to have bootsplash enabled in my old system with grub. However, after I reinstalling the system, I chose systemd-boot as my boot loader, as grub had some problem installing on my RAID-1 ESP.
I found many articles about enabling it with grub by adding bootsplash.bootfile=bootsplash-themes/manjaro/bootsplash option to the GRUB_CMDLINE_LINUX_DEFAULT line. Is there equivalent way to add that option to a systemd-boot loader?
By the way, I heard from this thread saying kernel 5.10 doesn’t support bootsplash. However, my old system ran on 5.10 and the bootsplash still worked.

How to enable Bootsplash and/or Silent boot on Manjaro XFCE for ARM on RPi4/400? Technical Assistance

Bootsplash won’t be in kernel 5.10 and above anyway, since the underlying tech in the kernel it uses is getting dropped. So it would be really hard to maintain going forward. And as Darksky mentioned, we have tried it on the rpi4, but it seems it uses another form of framebuffer, so we didn’t get it going.

Haven’t tried this myself but probably bootsplash-systemd is what you’re looking for. 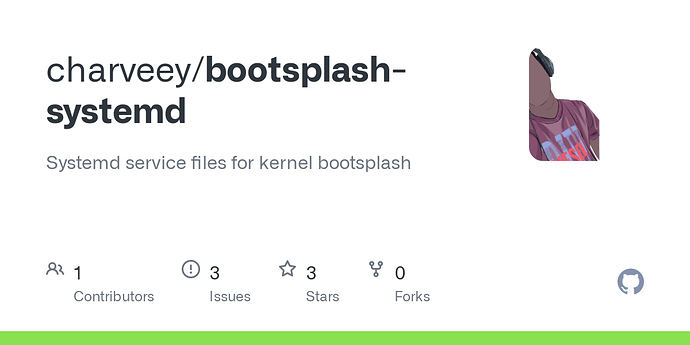 Systemd service files for kernel bootsplash. Contribute to charveey/bootsplash-systemd development by creating an account on GitHub.

Hi,
I think I find the solution. Installing bootsplash and bootsplash-systemd only does part of the work. After adding the bootsplash-manjaro into hook of mkinitcipo.conf and regenerated the image, we need to add bootsplash.bootfile=bootsplash-themes/manjaro/bootsplash into /boot/loader/entries/manjaro5.10.conf to make it like this

Just in case, I executed sdb-manage update (this might not be necessary)
The bootsplash then appears when I reboot the system.
Hope this post help!