How to control one computer from another visually?

To control one computer from another using the terminal I use ssh, but what if I want to use a program graphically?

I’ve seen there are multiple options like VNC and Deskreen. Which is the simplest one?

Which is the simplest one?

You’ll have to try them and see for yourself.

Anydesk doesn’t work with Wayland, and they stated they will not support wayland in the close future. TeamViewer has some issues and it is barely usable

There is also win2x and mac2x, but I’ve never used them.

I don’t think you can get simpler.

If you have already set up passwordless ssh, connecting is as simple as ssh -XC username@ip x2x -west -to :0.0

then you have control over the the desktop at ‘ip’ from your current keyboard and mouse.

TigerVNC is likely the easiest to setup and use. Remember to run VNC over SSH.

Teamviewer is a proprietary solution - where you connect using Teamviewer servers - good for remote support of users running Windows or Mac - not so good if the user needing support is running Linux and not technically minded.

Theres also NoMachine - which I know nothing about.

It is also possible to use xdmcp - this allows for starting a single program - sending only the screen over network - the protocol is unencrypted so it should not be used with untrusted connections - it can be run over ssh - makes it more secure.

That one is new to me - thank you for that tip

x2x has a long history. It was born in the times when life was hard, window
managers were simple and displays were rectangular. Now it needs an overhaul.

This one is new to me as well, so I read up a bit more. And according to its page on Github, it is dormant. So I’m skipping it and not recommending it.

x2x has a long history. It was born in the times when life was hard, window
managers were simple and displays were rectangular. Now it needs an overhaul.

It works just fine on my wide screens up to 1920x1080… I don’t have anything with higher resolution.

Remmina Desktop Client deserves to be mentioned. It’s in the official repos and under active development, used it to remote into an asus netbook running 32bit manjaro, worked well, got usable results even from that low-spec device.

This might be a bit late to the party, but I noticed that Barrier, which is an Open Source fork of Synergy, is available in the Community Repos.

It does what x2x does, and what Version 1 of Synergy did, and can control up to 15 computers (the server + 14 others) 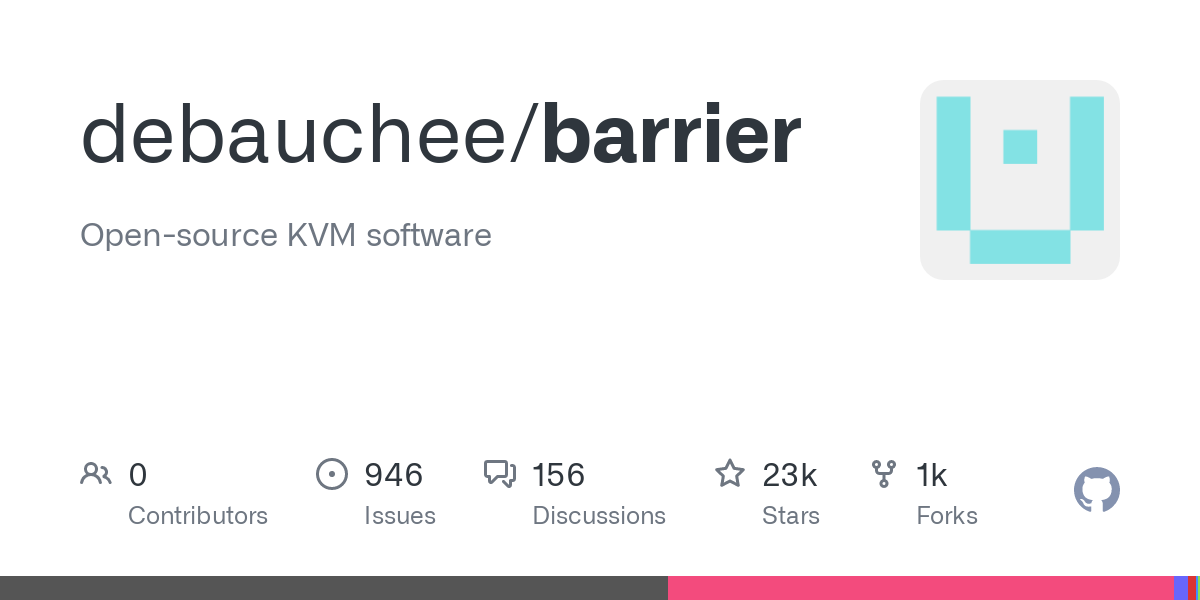 Open-source KVM software. Contribute to debauchee/barrier development by creating an account on GitHub.

"No one has TWO television sets." Perhaps you remember that line out of that 1980s movie. Well, if your hardware looks more like something out of the sequel then you might find barrier useful for managing all that equipment.

Control multiple computers at the same time with Barrier

If you’ve ever needed to control multiple computers from a single keyboard and mouse, Barrier is software worth checking out! Barrier is a software solution (a fork of Synergy) which replaces…