Is there any way to achieve the function as in the macOS, such that when you right-click the title of the document in the title bar of the apps such as office then there is an entry in the contextual menu" show in the folder", then you can click to go to the folder containing that document? Thanks.

Edit: I found some of the apps already have this function at

But none of the libreoffice apps has this function.
A lot of others such as texstudio don’t have this either, but the path is in the title bar

I was hoping Manjaro has this function in the system, such that when you right click the title bar. the context menu shows the containing folder and all the above folders.

Only KDE Plasma native applications like Kate has that menu. 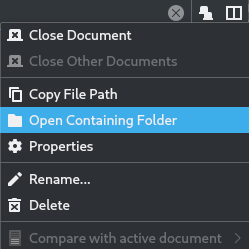 Maybe this will help
https://ask.libreoffice.org/en/question/191436/open-containing-folder-feature/

2 Likes
Context menu of title bar shows the containing folder and all the above folders
linux-aarhus closed February 9, 2022, 6:42pm #3