How do I prevent sound from moving between monitors?

No mater which monitor is active I want the sound to stay on the center monitor.

The right monitor has no sound so it is not an issue.

If I turn on the left monitor, that sounds like mono-crap, the sound moves to it.
I don’t want that to happen.

I want the system to only think the center monitor can play sound.
How do I achieve this?

If the HDMI outputs for other monitors are muted in ALSA, PulseAudio should recognise that they are unavailable for audio playback and audio streams will not be switched

Use alsamixer in terminal to adjust audio hardware settings

And use this command to save new ALSA settings 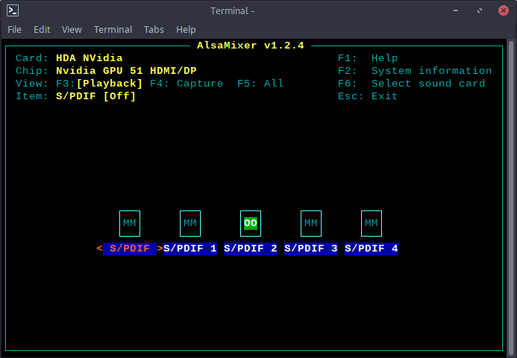 Sadly that is not working.

As soon as I turn the second monitor on the sound switches to it.
When I mute it the sound goes off on both monitors.
It really seems like the same HDMI output is feeding both monitors, which seems unlikely.

One monitor is branded Sceptre and the other Silo.
Yet the single remote control works both monitors.
I have to make sure that I’m careful how I aim the remote.

Example: on my system the command to set the correct profile is