How can I change the monitor size in Display Configuration?

Is it possible to change this so all monitors are treated as the same physical size?
Thanks!

The Display configuration goes from the resolution, not the physical size of the screens. So if you have 3 screens, where 1 is 2560x1440 and 2 on the sides with 1920x1080, then it displays it correctly.

Is it possible to change this so all monitors are treated as the same physical size?

That’s impossible, look at two different pixel sizes: 1080p and 1440p
Try changing 1440p to 1080p for the center monitor, all 3 monitor sizes would be the same in Display Configuration

Lowering the resolution to match the others would fix this but, I got the center display because it had a higher resolution.
Maybe I explained poorly. In this screenshot of the edge of the left and center monitor, the bottom edge of the monitor with the lower resolution does not line up with the and looks like it does in Display Configuration. 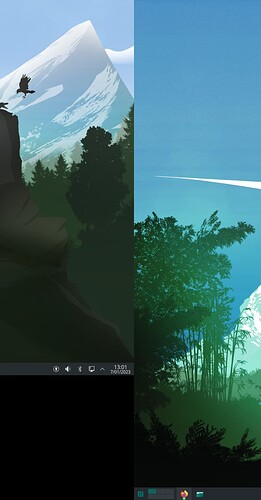 The mouse cursor is displayed at a certain point in the resolution canvas. So if you have different resolutions on different screens, the mouse will jump around when going from one resolution to the other. Because it’s going from 555x768 on a 1920x1080 to 556x768 on a 2560x1440 display.