I have a problem with my GPU (Nvidia RTX 2080 TI (Gigabyte Windforce)) in Linux Manjaro. If i start a game, for example Rocket League, my GPU temps climb to 79°C and its fans ramp up to 130%. I also have Windows installed on the same hardware, but this problem only exists in Linux.

I attached some screenshots of the temp readings, GPU info and of the nvidia smi. 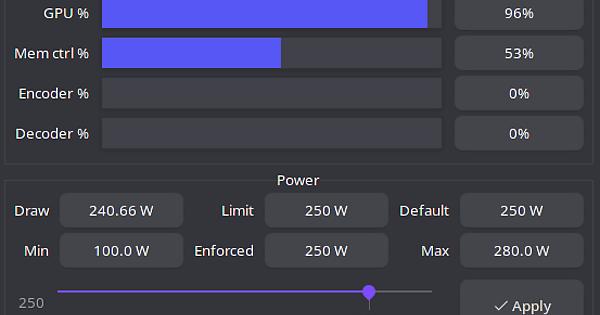 Is the game the Linux version? Or the Windows version (through Wine / Steam / Lutris / PlayOnLinux)?
Do you use the non-free driver for your Nvidia GPU?

That being said, 79°C is not unusual on an active GPU. You can rather worry above 90°C…

Thanks for the quick reply,
so I play Rocket League with proton, but the same thing occurs in CS:GO, which a native linux game.
I do use the proprietary drivers for my nvidia gpu (vers. 510.47.03).
And the temperature isnt really the problem, the fans ramping up to 130% is really annoying, as they get very loud at 4475 RPM. The RMP spikes are visible in my 3rd screenshot.

I talked to some guys on the nvidia linux forum and they told me to limit video clock speed to 1650 MHz. I played RL for half an hour and didnt get temps above 74°C with my fans staying at 70%.