It would be great, if you could help me solving this simple - but for me as Linux beginner unsolvable - Problem:

The first question I ask myself is:
Where is the memory hog hiding?
Is there an easy way to find out where the large files are located?

The second, even more important question:
How can I use GParted to increase the size of my system partition?
I opened GParted and wanted to shrink my “data”-partition in the first step, but unfortunately that doesn’t work (see GParted — ImgBB). The Minimum size is 426639 and the Maximum size is 426638 MB…

It is correct that I have to shrink one partition first, so that I can make another one bigger, isn’t it?

Can someone tell me why the partition cannot be made smaller?
How do I go about successfully getting my system partition bigger here?

Thanks already for your support

The first question I ask myself is:
Where is the memory hog hiding?
Is there an easy way to find out where the large files are located?

I would investigate this before resizing partitions.

There are a few tools you can use to visually see where most of the space is being used up:

You probably already have one or the other installed on your system.

Here is an idea of what such tools display for the user. You can use your mouse to hover over “slices” and click on them to go further down the directory tree: 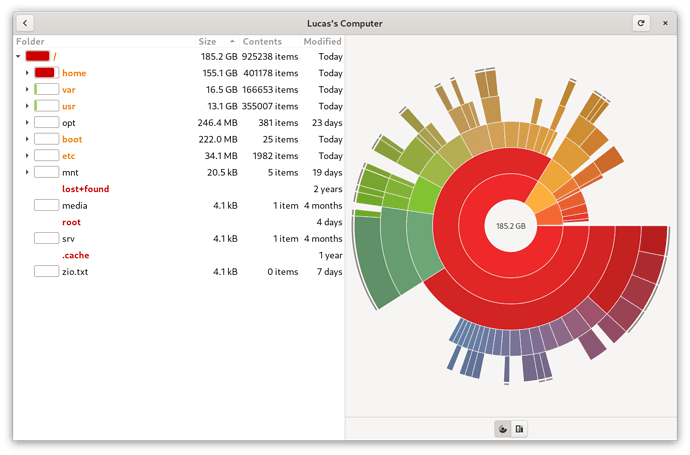 This is where I would start.

i have deleted two Timeshift snapshot but still there are only 2.2GB free space?
Is there more to do than deleting the snapshots in timeshift?

What do you mean with “Package Manager”? Octopi?
In the standard manjaro software manager i have no cache section (or i don’t find it

What do you mean with “Package Manager”? Octopi?

Was referring to Pamac. You can still clear the cache of older versions of packages with the following command:

Answer “no” for the second question (about repositories) to play it safe.

What did Disk Usage Analyzer reveal?

here are some pics of my disk usage: 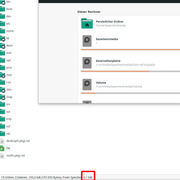 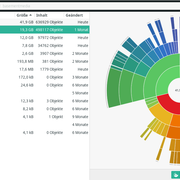 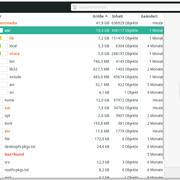 Are this normal “values” for the system partition?
By the way: Why does Disk Analyzer say 6GB are free and the File Explorer says only 3?

Are this normal “values” for the system partition?

They appear normal to me, except for your /var/ directory, which is nearing 8GB. (For comparison, mine is only 500MB). My hunch says you probably have a lot in the /var/cache/ folder.

Did you try clearing the pacman cache with,

Answer “no” for the second question (about repositories) to play it safe.

Why does Disk Analyzer say 6GB are free and the File Explorer says only 3?

Could be due to the use of hardlinks. You can gauge how much free space you truly have with,

EDIT: Correction about your /home/ folder.

EDIT again: I’m a bit confused about your layout upon second review. You have 12GB of data directly in /home/, yet also a separate mount point for /home/basement/ that points to your larger (400GB+) partition?

i tried sudo pacman -Sc but it did not change anything, still only 3 GB left 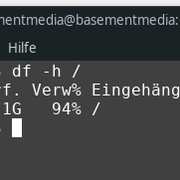 EDIT again: I’m a bit confused about your layout upon second review. You have 12GB of data directly in /home/, yet also a separate mount point for /home/basement/ that points to your larger (400GB+) partition?

By the way here are details about the /home/ 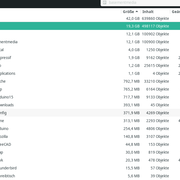 Where is the memory hog hiding?

There is no hog - but various places may take up space e.g.

You cannot resize your system partition while running the system. You need to boot some kind of live ISO e.g. https://gparted.org or a Manjaro ISO with gparted - ruling out the KDE edition.

By the way here are details about the /home/

Your first screenshot shows /dev/sda3 mounted as /home/baseme… (it cuts off the name). 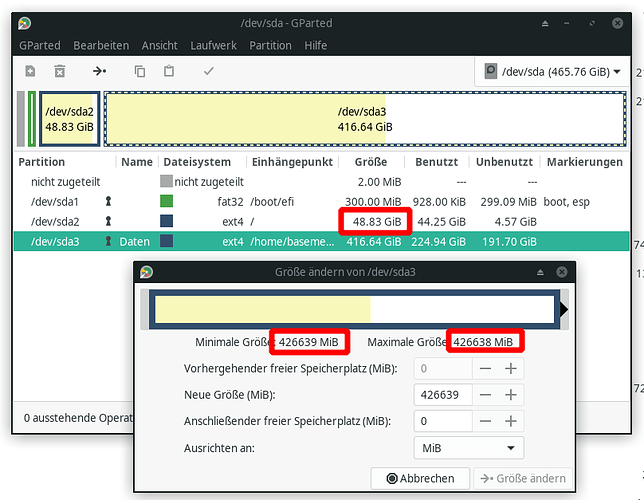 But you also have 12GB used by /home/basementmedia on /dev/sda2 (the same partition as your system).

You can immediately relocate 12GB of data by moving everything from /home/basementmedia (on sda2) to your other partition on sda3.

It’s an unusual layout, and perhaps you were confused by a step during installation to mount your user(s) home directory (/home) from its own partition, as you intended?

As well as your /etc/fstab file:

Did you point Disk Usage Analyzer to further inspect the /var/ directory? Mine is taking up 500MB, yet yours is consuming 8GB, so it’s noteworthy to check out.

No ;-(
The problem is that I just don’t understand Linux yet and seem to have made a mistake at some point in the installation process. So it would be super nice if you could guide me here step by step “for dummies” to a correct and sensible partitioning (or whatever you call it under Linux)… I am helpless 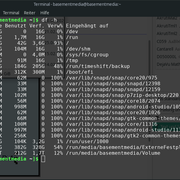 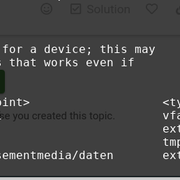 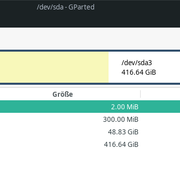 You can immediately relocate 12GB of data by moving everything from /home/basementmedia (on sda2) to your other partition on sda3.

How is this done? By moving from red rectancle to arrow? 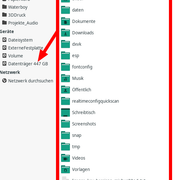 But home/basementmedia will then still exist on sda2 won’t it?

As said…i need a detailed step-by-step or i think i will fail ;-(

Did you point Disk Usage Analyzer to further inspect the /var/ directory? Mine is taking up 500MB, yet yours is consuming 8GB, so it’s noteworthy to check out. 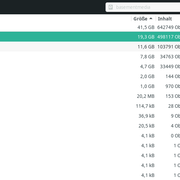 Check the size of the journal. It can grow to several GB:

There’s too much going on.

From what I can gather, your disk layout looks something like this:

Furthermore, I’m not sure when it was configured as such (and perhaps behind the scenes), Timeshift’s backups are mounted under sda3, instead of sda2.

Ideally, /dev/sda3 (your large partition) should have been mounted as /home/ during installation. Going forwards, everything would have been cleanly laid in place, like so:

As for your personal home folder, you would see the usual things like Documents, Downloads, Pictures, Videos, etc, and also you would create your “daten” folder and dump your 100+ GB of stuff in there.

but for me as Linux beginner

I believe you went astray from the defaults during installation / post-installation setup. I’m not sure this might be the best distro for a Linux beginner, yet the installer is fairly straight forward. I’m trying to think of a user-friendly way to reclaim those 12GB without putting yourself at risk of accidentally losing data.

EDIT: The live system’s “file-system tree” always starts at “/” and everything nested underneath it are directories and sub-directories.

When you “mount” something, you choose a directory where the partition will branch out its own file-system. From the file browser’s perspective, however, it appears like any other folder.

So for example, let’s say you only have one partition (sda2), and it is the system/OS partition. On the live system, the top-most directory will be “/”.

You’ll see a bunch of directories and sub-directories nested underneath it, such as:

Now when you browse to /home/, you’ll see an empty folder! Where’d your files go? Well, they still exist on sda2, but since you mounted sda3 over /home/, it “replaces it” in the file-system tree, so that starting from /home/ and further down is actually the sda3 file-system (currently empty.)

The moment you unmount sda3 from /home/? You’ll see your existing files once again.

A common partition layout is to use the entire large partition (such as sda2) for everything: Root system (aka “/”) and home. Everything will live under one file-system, one partition.

Another common layout is to reserve /home/ for a separate partition (such as sda3). Which means if sda3 is not mounted or unavailable, your /home/ folder will appear empty (as it should).

Theoretically, if you were to unmount /dev/sda3, and then attempt to browse /home/basementmedia/daten/, you would find an empty folder.

Timeshift’s backups are mounted under sda3, instead of sda2.

They’re not really backups if they’re on the same partition (or drive) and timeshift is a system restore utility not a backup utility.

For example, my sda1 (system/OS) mounts under / and /run/timeshift/backup, and I have Timeshift only make snapshots of the system (excluding home folders, /mnt/, /root/ …)

So /run/timeshift/backup is the partition to be backed up?

I would’ve thought it was the partition where backups are put, since / is always /.

Or is btrfs involved?

The issue above is that the OP is using an unusual partition layout (probably by accident).

I can understand their confusion, especially being new to Linux.

Which adds an extra 12GB of files taking up sda2’s capacity, since every home user file (that is not saved under “daten”) is taking up space in sda2 (rather than ideally sda3).

But you save 12GB worth of files under /home/dmt

This is going to take up 12GB of space under the sda2 partition, not the sda3 partition.

I realise this, but that doesn’t change the fact that “backups” which are stored on the same partition as the data are not backups.

You’re right, they’re not real backups. I was borrowing the same nomenclature that Timeshift uses (i.e, /run/timeshift/backup) so that the OP knew which line in their screenshot I was referring to.

I don’t want to stray away from the OP’s original issue, though. But I agree: if it’s on the same physical media, it cannot be considered a real backup. (Some would argue on the same physical computer still brings risks, and one should create physical distance between the two copies of data.)